Электронный журнал Oil.Эксперт
Price forecast from 18 to 22 of April 2022 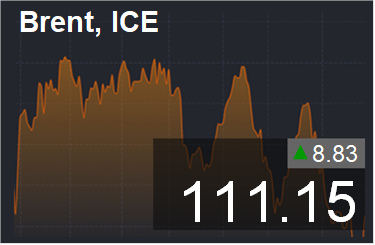 European officials are frantically looking for gas around the world. Algeria, Azerbaijan, Tunisia and Libya could be the beneficiaries of this global begging. In their unbridled struggle with Russia, as has happened more than once in history, European leaders can reach insanity. Candles will be distributed to citizens in August so that it is a little warmer and a little lighter on long autumn evenings.

The main threat to Russia lies in the fanaticism of Europe. What is at stake is not only tolerant European values, but also the possibility, sometime in the future, to receive resources from Russia in exchange for beads, after their victory, of course. It should not be denied that the loss of the European market will have an extremely negative impact on the Russian economy this year. This will cause both a loss of company profits and a budget deficit.

It is worth noting that even now it is dangerous to keep funds in foreign currency accounts, they can be taken away. And it is impossible to buy the necessary products from Europeans for euros directly from the manufacturer. De facto, the European market is already lost to Russia. There is no point in accepting payment with money for which nothing can be purchased. If there is no light in the current grim situation, then Russia will have to stop the physical supply of resources to the West in the coming weeks, and possibly even days. This event could trigger a rapid move in the oil market towards $150.0 per barrel.

By winter, a starving North Africa may storm the southern coast of Europe. On rafts, with duduks and drums. Simply because the price of a bread cake at their home has already tripled in price, and it will only get worse with food in dependent countries.

Grain-producing countries have taken a course to limit their own exports. This maintains current prices. If the moratorium on grain exports is extended after the new crop begins to arrive from the fields this summer, this will obviously lead to a strong warming up of the market and the current levels will be covered by at least 30%, but rather by all 50%. Only if there is an understanding in the world what volumes of grain and sunflower oil Ukraine will be able to supply to the foreign market this season, we can count on a reduction in tension in the food sector.

We see a firm and at the same time artificial exchange rate of the ruble.

Selling dollars and getting native money instead is no longer such a bad topic for companies, because otherwise you can get nothing at all. One Ursula, one Frau von der Leyen, can simply take the money away by blocking the account. And then what to do? Call Biden or Trump? Now this is not an option.

Since the dollar cannot exist without being linked to a correspondent account in an American bank, a situation may soon occur when trading in dollars on the Moscow Exchange, even among residents of the Russian Federation, will become impossible, since all correspondent accounts will be blocked.

Not a big deal, we still have the yuan, the South African rand, the Indian rupee and even the shekel.

Over the past week, the difference between long and short positions of managers decreased by 0.3 thousand contracts. Money came to the market in a small amount, while the balance between the parties was preserved.

Growth scenario: we are considering the April futures, the expiration date is April 29. We will continue to keep long from 103.00. In the event of a fall to 105.00, those who wish can enter the purchase.

Falling scenario: sellers failed to keep the market under their control. We do not sell. 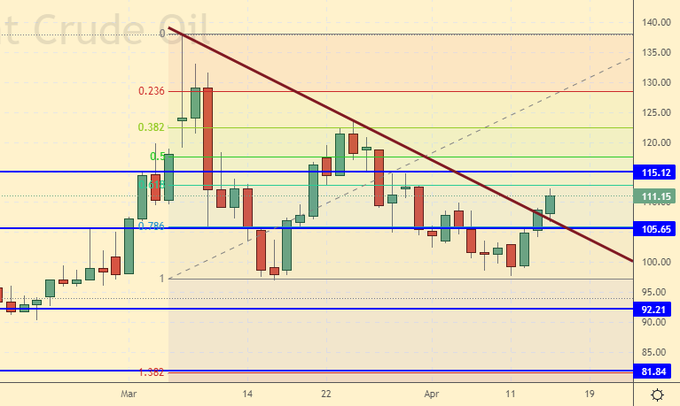 US fundamental data: the number of active drilling rigs increased by 2 units and now stands at 548 units.

We’re looking at the volume of open interest of managers. You should keep in your mind that these are data from three days ago (for Tuesday of the past week), they are also the most recent of those published by the ICE.

Over the past week, the difference between long and short positions of managers increased by 1.7 thousand contracts. We can explain the rise in prices last week by the reluctance of some players to wear shorts during the long weekend in the US.

Growth scenario: we are considering the June futures, the expiration date is May 20. If the market returns to 100.00, you can buy. The current levels are somewhat too high to enter long.

Falling scenario: we will keep the shorts open three weeks ago. The position’s chances of survival are small, but at least $6 per barrel can definitely be pocketed, since we opened down from 114.00. 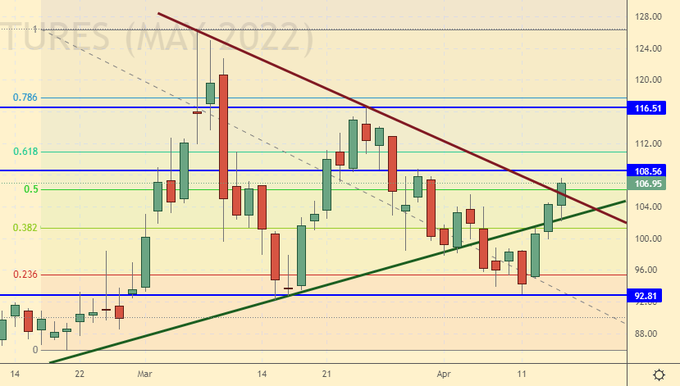 Growth scenario: consider the May futures, the expiration date is May 12. It is unlikely that Europeans should count on cheap fuel this year. We hold longs.

Falling scenario: do not open shorts yet. We take a break. 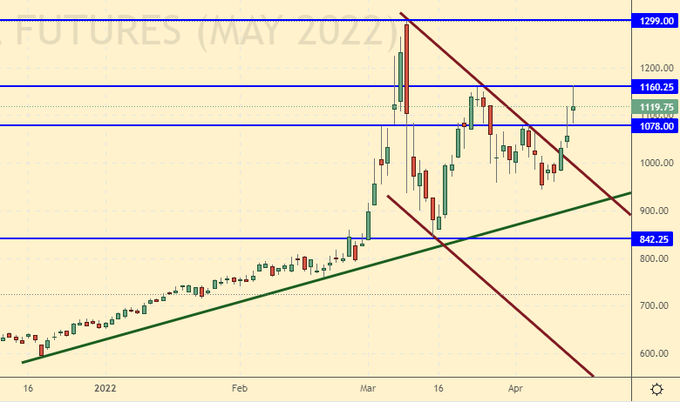 Growth scenario: we are considering the May futures, the expiration date is April 27. There will be good demand in the gas market. We continue to hold longs.

Falling scenario: from the area of 6.100 we could count on a downward correction, but so far there is none. Shorts in this situation are possible only at hourly intervals when signals of a downward reversal appear. 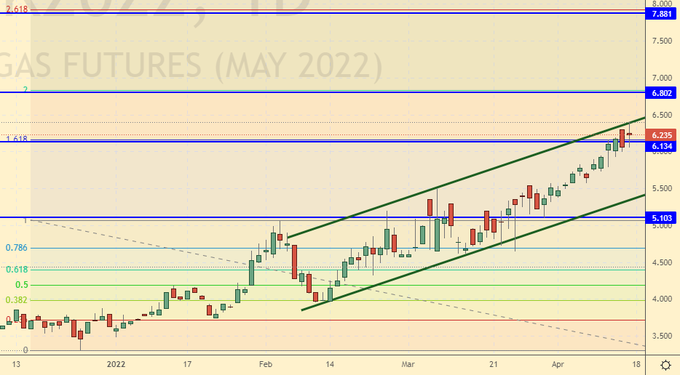 Let’s look at the volumes of open interest of managers in wheat. You should keep in mind that these are data from three days ago (for Tuesday of the last week), they are also the most recent of those published by the CME Group exchange.

Over the past week, the difference between long and short positions of managers has increased by 3.1 thousand contracts, while there are slightly more bulls than bears in the market.

Growth scenario: we are considering the May futures, the expiration date is May 13. Let’s keep going long. There are signs of a downward reversal, but they are not convincing.

Falling scenario: we have been knocked out of the short, however, if the market closes any day below 1050.0 next week, we will sell again. 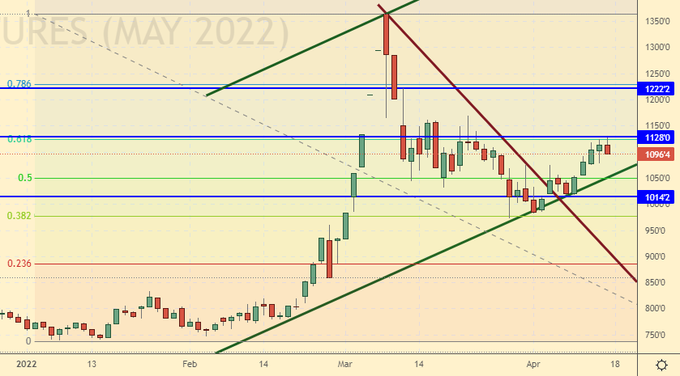 Let’s look at the volumes of open interest of corn managers. You should keep in mind that these are data from three days ago (for Tuesday of the last week), they are also the most recent of those published by the CME Group exchange.

Last week the difference between long and short positions of managers increased by 7.8 thousand contracts. Bulls do not believe in falling demand and continue to push the market up.

Growth scenario: we are considering the May futures, the expiration date is May 13. Our purchase last week turned out to be correct. The market continues to grow further. It is very likely that we will enter the area of 840.0.

Falling scenario: when approaching 840.0, you can try to sell, provided that wheat has already begun to correct. 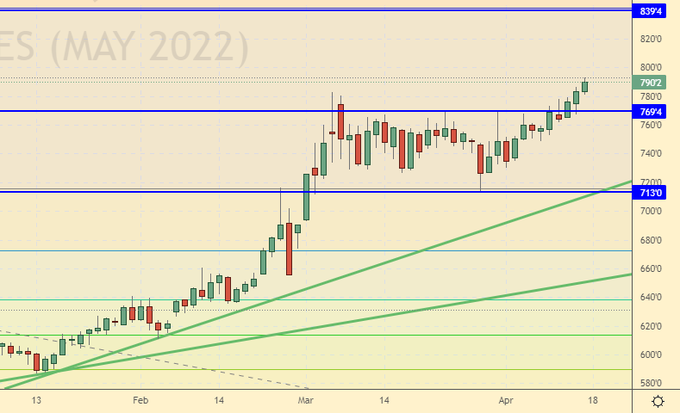 Growth scenario: we are considering the May futures, the expiration date is May 13. Soy high. Further growth does not look reasonable, but if grains go higher, soybeans will also be affected. While we take a break. We don’t buy.

Falling scenario: the short is interesting from a technical point of view. We will sell. Recommendation: 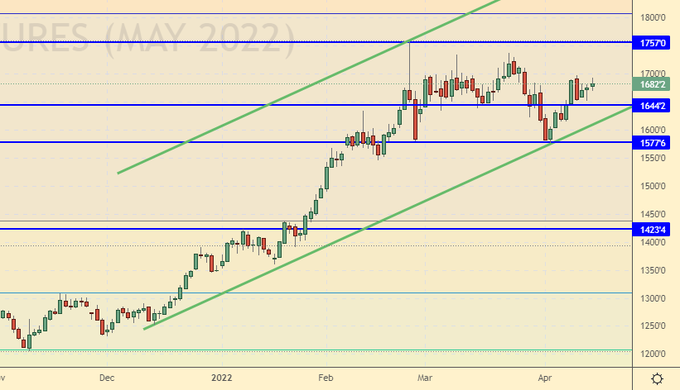 Growth scenario: we are considering the May futures, the expiration date is April 29. It is likely that the market will reach 21.00 after which we will see a pullback. We hold previously open longs. 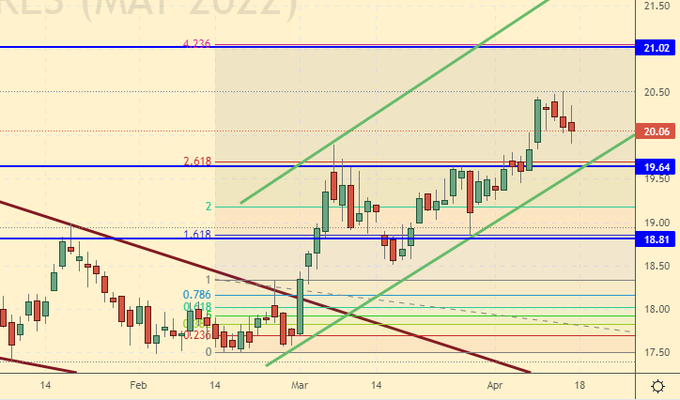 Growth scenario: we are considering the May futures, the expiration date is May 18. Tough fight in the 210.0 – 240.0 range. So far, there is no vision of further market growth.

Falling scenario: short is possible. Selling is scary, but necessary.

Falling scenario: you can sell here. Structurally, the market is ready to continue falling. 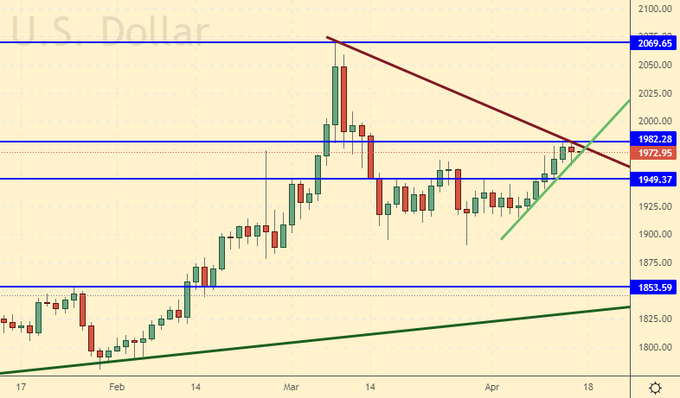 Growth scenario: we continue to wait for the arrival of the train at the station «1.0600». When going to this level, you can buy.

Falling scenario: we continue to hold shorts. It is very likely that the target at 1.0600 will be reached. 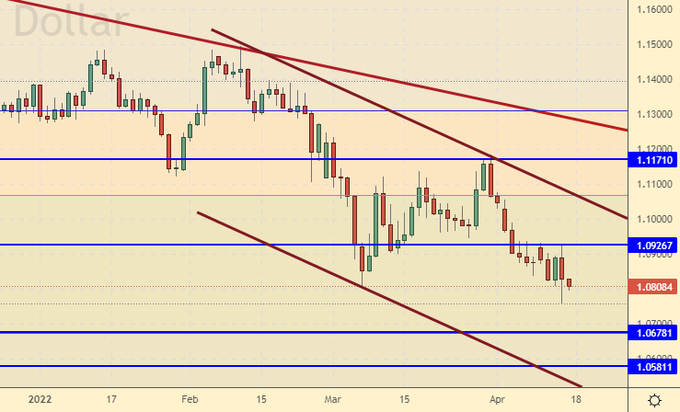 Growth scenario: while we will be in the corridor 82.00 — 85.00. Until foreign investors are allowed to trade, the ruble will remain relatively strong. A slight weakening of the national currency is possible, but we will not see a strong upsurge on the pair’s chart without a normal trading process.

Falling scenario: given that a strong ruble is not beneficial to the budget, we can hardly talk about another movement to the level of 70.00. If it nevertheless takes place, then it is worth waiting for the next indulgences in favor of the dollar from the Government. 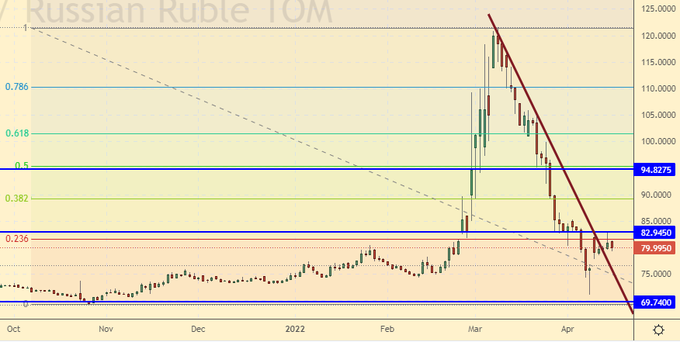 Growth scenario: a number of Russian public companies have introduced a moratorium on the publication of quarterly financial statements. In particular, this was done by three metallurgical plants MMK, NLMK and Severstal. It is possible that this practice will be expanded. What then, in this case, should minority shareholders do in the stock market? There are no fundamental guidelines. If an investor can still somehow believe, for example, in gold, then believing in a share of a single company without understanding its financial condition is extremely reckless. Comfortable for buying futures on the RTS index may be the level of 80,000. Long from current levels is possible, but looks somewhat overpriced.

Falling scenario: we continue to assume that it is possible to sell from 130,000. Shorts opened a week ago can be kept. 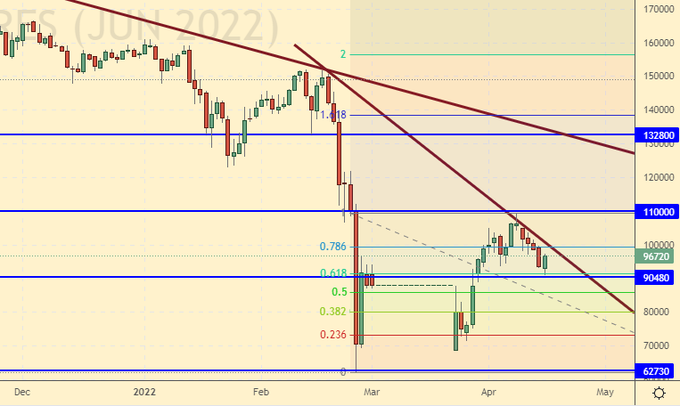