Электронный журнал Oil.Эксперт
Price forecast from 14 to 18 of March 2022 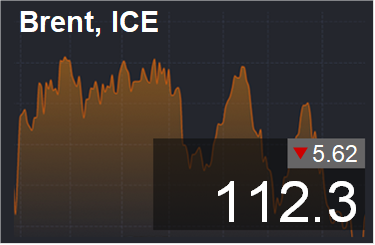 Biden banned the purchase of oil and gas from Russia. It’s graceful. Russia, the world’s main fertilizer producer, has banned their exports, which is also elegant. Against the backdrop of all these graces, in Turkey they are fighting for sunflower oil, but in Spain, no, you heard right, it was in Spain that restrictions on the sale of pasta in one hand were introduced in stores.

«Why don’t we raise the price of gas to 4,000 thousand dollars per thousand cubic meters in Europe, » Novak thought and suggested closing Nord Stream 1. Europe responded with a determination to freeze its citizens and called for even greater savings. Now, as a result of the struggle in languages, gas prices are at the level of $1,500 per 1,000 cubic meters, but no one needs the German economy at such levels.

The rise in gasoline prices in Europe has led to the fact that in Italy they began to add ethyl alcohol to the fuel, it is cheaper than gasoline. At this rate, they will soon be riding cognac. In the meantime, since Monday, Italy is waiting for a strike of truckers due to rising fuel prices.

Negotiations on Iran stalled again. Blinken, this is the American Secretary of State, honestly admitted that now everything depends on Russia and Iran. Who will allow you to get additional volumes of oil on the market now, dear friend! Let’s stay above $100 per barrel for now. No wonder that immediately after his election, the new Iranian President Ebrahim Raisi paid his first visit to Moscow on January 20. Tehran has no use for a new nuclear deal at the moment. Oil is high.

Washington is already declaring its love for the Venezuelan Maduro. Who would have thought. But Rosneft has been sitting in Caracas for a long time, and everything will not be easy for Biden there. You’ll have to sweat and be patient.

Reading our forecasts, you could earn on the dollar / ruble pair by taking a move from 90 to 120 rubles per dollar.

The ban on the export of fertilizers from Russia has already contributed to the increase in the overhead costs of farmers. US sowing costs have risen by 30%, and so far retail has not seen this increase. Prices are currently rising on panic and the desire of households, which still have money, to create a stock of food in their closet.

Seeing how empty the shelves in Europe, we can not talk about falling prices on the stock exchange. Wheat may roll back to 1,000 cents per bushel, but it is unlikely to go even lower, even against the backdrop of positive forecasts for a new crop.

And there will be no positive forecasts. Apparently, the sowing campaign in Ukraine in a number of regions will be disrupted, which will lead to a severe shortage of grain in the Black Sea region. In the fall, if Russia sends someone a boat or two of food, then only according to their mood and only to those who are now behaving well.

On Monday, the dollar to ruble exchange rate on the street between honest citizens will rise to 150 rubles for one US dollar. For cash you will have to pay beyond measure, thanks to the American grandfather Joe with his ban on the import of cash dollars into Russia.

Tourists, of course, will now be hard. It’s good if the Turks and Egyptians start accepting rubles, otherwise they will experience economic stagnation in coastal shops, since Russian travelers will not have dollars.

By the summer, our shortage of American money will be so acute that individual citizens will offer for them more than 150 rubles. For example, 300 rubles. The elites will shake the fat, driving the course into the clouds. However, with such a hype, you can start printing dollars yourself, right at the Goznak factory, since the people ask. The fact that a black currency market has reappeared in Russia is bad.

And what’s worse is that Russia is ready to sell resources, Europe is ready to buy them, but banks are not ready to make payments. So far, the contracts for April are being held with difficulty. The inflow of currency into the country will be small in the spring.

We do not sell dollars, we do not buy rubles for them, so that the US Federal Reserve does not decide on the rate on Wednesday, March 16th.

Over the past week, the difference between long and short positions of managers has decreased by 100.1 thousand contracts. We see an unprecedented counterattack from sellers. 50,000 contracts were bullish and turned bearish.

Growth scenario: we consider the March futures, the expiration date is March 31. It is necessary to keep long from 110.00. Another upside is possible as Iran is in no hurry to sign a new nuclear deal. Falling scenario: we are not in a hurry to sell. It is not clear how Europe will conclude contracts for April for Russian oil. 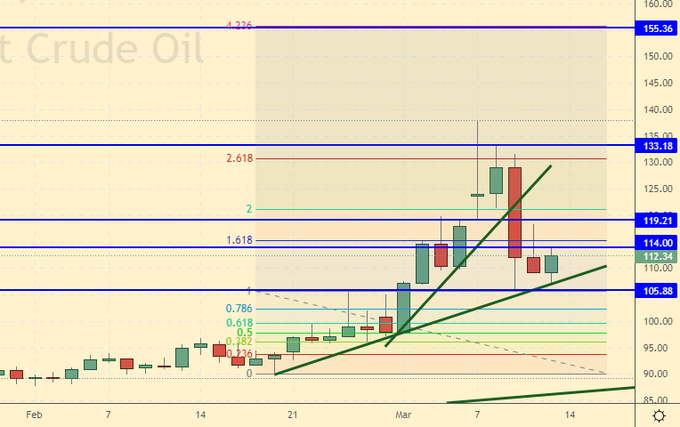 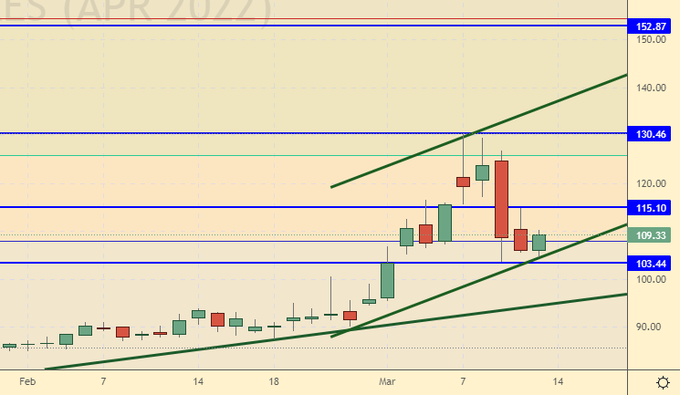 Fundamental US data: the number of active drilling rigs increased by 8 units and now stands at 527 units.

Last week, the difference between long and short positions of managers decreased by 9.4 thousand contracts. We see a slight reduction in bullish positions, buyers continue to control the market. Growth scenario: we are considering the April futures, the expiration date is March 22. You can buy from the current levels. Until the market sees reports from companies for the 1st quarter, you can bet on growth.

Falling scenario: we will not sell. There will be a downturn in the oil market, but not tomorrow. Recommendation:

Growth scenario: we are considering the April futures, the expiration date is April 12. The current levels are interesting for purchases. In Europe, there is a strong rise in fuel prices.

Falling scenario: we will not sell. The market is extremely volatile. Car season is about to start. The demand for fuel will rise. 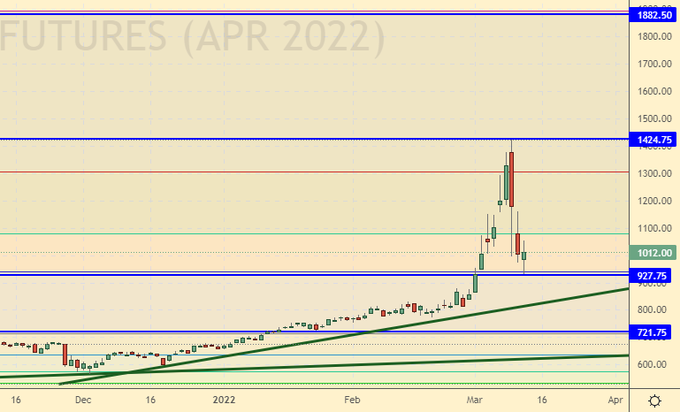 Growth scenario: we are considering the April futures, the expiration date is March 29. We continue to hold longs. Gazprom may cut off supplies to Europe if it is impossible to receive payment for raw materials.

Falling scenario: we will not sell. The gas market in the US will go up after the price of gasoline. Recommendation: 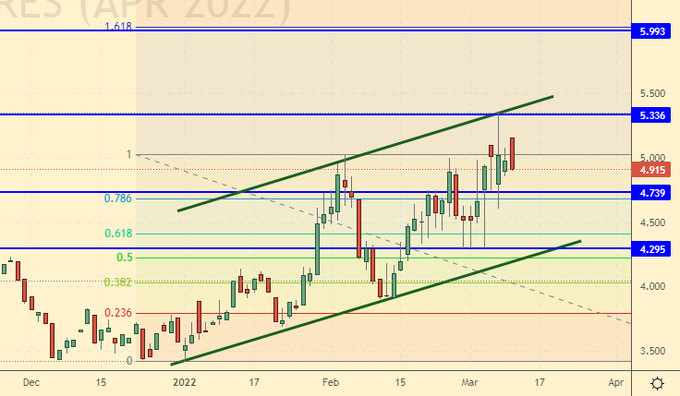 Growth scenario: we are considering the May futures, the expiration date is May 13. The current levels are of interest for a new round of buying. It is absolutely clear that the cost of growing wheat has increased by at least 30%.

Falling scenario: do not sell. Until we see the May report from the USDA, there is no point in talking about falling prices. 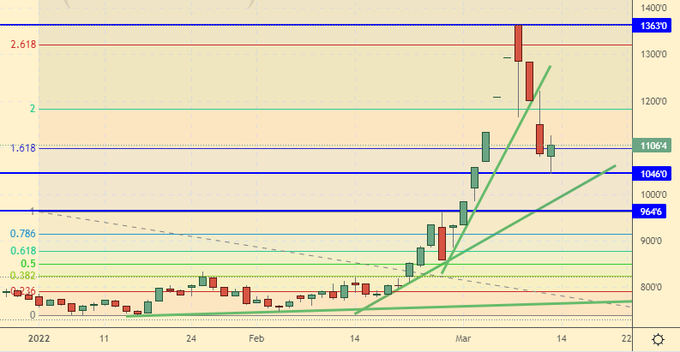 Last week the difference between long and short positions of managers increased by 18.6 thousand contracts. Bears as a species have disappeared from the corn market. People cover shorts, which continues to push the price up.

Growth scenario: we are considering the May futures, the expiration date is May 13. We will keep longs. Let’s set a target at 838.0 and wait.

Falling scenario: do not sell. Sowing in Ukraine is in jeopardy. 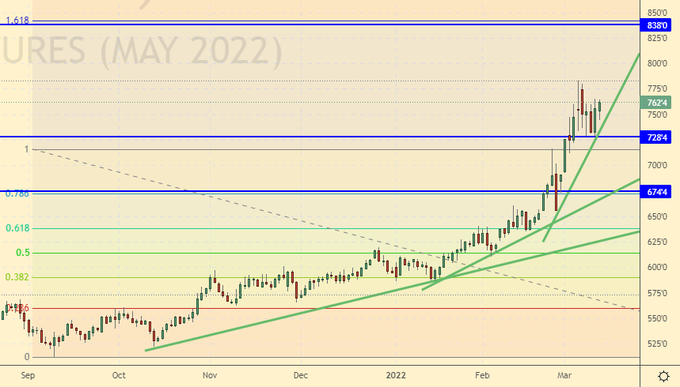 Growth scenario: we are considering the May futures, the expiration date is May 13. For purchases, I would like to see a correction. You can enter now, but with a close stop order.

Falling scenario: A fall is hardly possible yet. Until the situation in Ukraine calms down, oilseeds will not fall. 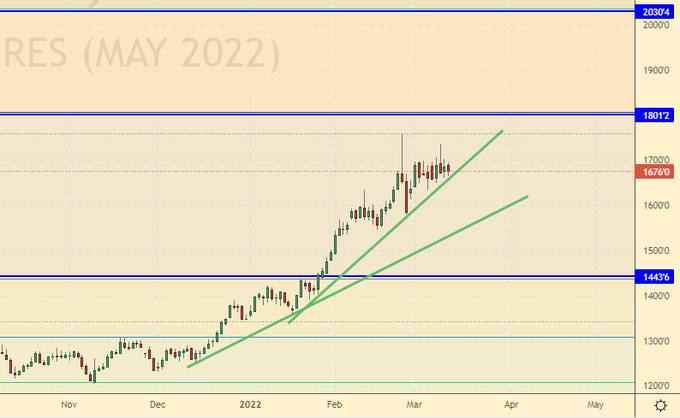 Growth scenario: we are considering the May futures, the expiration date is April 29. We arrived at 20:00. Let’s keep going long. Grandmothers in Saratov go into the commodity, taking a bullish position.

Falling scenario: we have removed the previous recommendation to sell from 20.00. Probably right. Panic is brewing in the food market. Recommendation: 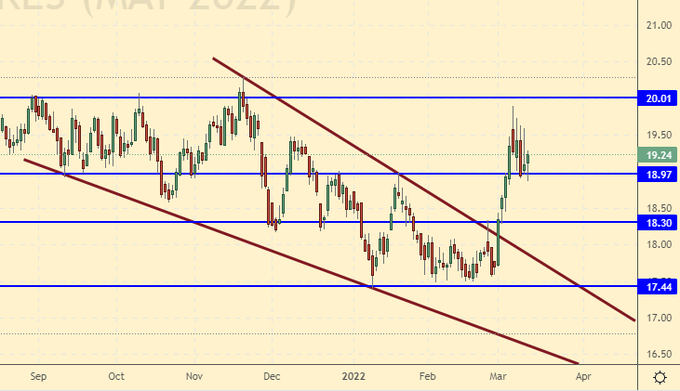 Growth scenario: we are considering the May futures, the expiration date is May 18. We switched to the May futures, but for now, unlike the March one, it is in an ascending channel. We will buy here.

Falling scenario: shorts will be held until 200.00. A stronger fall in the current nervous situation is hardly possible. 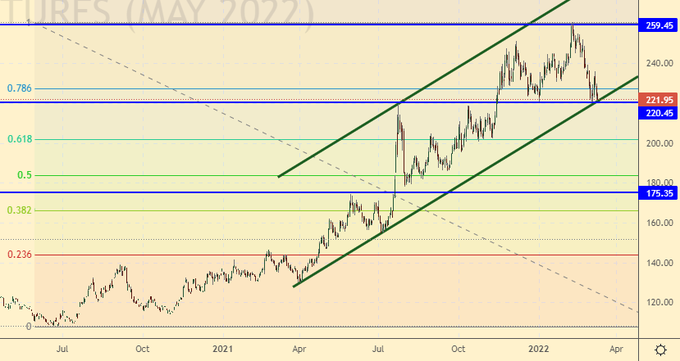 Growth scenario: we continue to hold longs. If the US Fed does not raise the rate on the 16th, then gold will go to 2300 (for starters).

Falling scenario: do not sell. Too tense situation in Europe, and in the world. 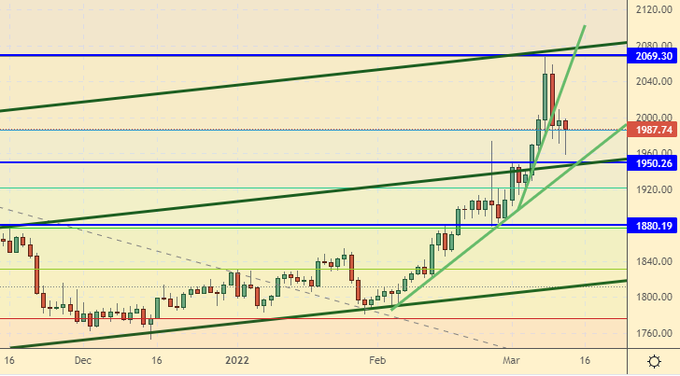 Growth scenario: do not buy. The pair is heading towards our downside target at 1.0600. But from the area of 1.0600 you can try to go long. The US is a colossus with feet of clay, especially after the CBR asset freeze. If Europe swallows Moscow’s move towards Ukraine, the euro will rise.

Falling scenario: increased shorts from 1.1100. We are waiting for the continuation of the fall. Recommendations: 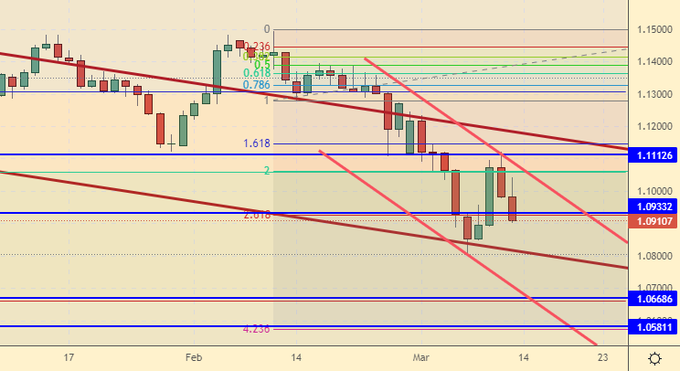 Growth scenario: the Central Bank is expected not to let the pair go above 120.00. However, the ban on the import of cash dollars into Russia may provoke the bulls on Monday. And here a lot will be decided by nerves. If the Central Bank continues to stand, then the speculators will retreat. If banks are still liable for playing against the ruble, then the market will be calm.

Fall scenario: we are not talking about the strengthening of the ruble yet. Early. But if the West turns out to be a flimsy boy and falls into stagflation by the 3rd quarter, then there will be no economic horror in Russia. 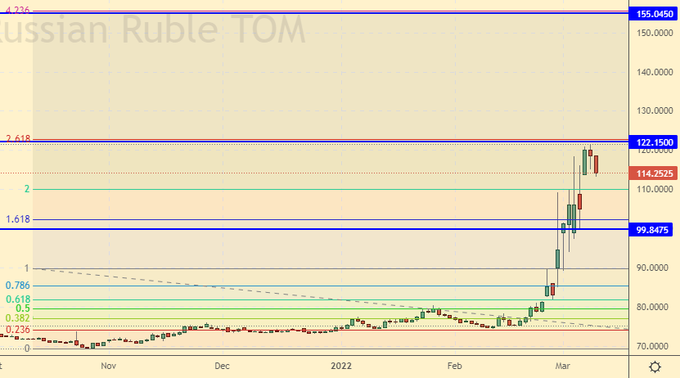 Growth scenario: The Central Bank does not want to trade from March 14 to March 18 on the stock market. Surely the bankers draw black pictures in front of Nabiullina about how bad it will be for everyone. You have to be brave and face the truth. Yes, Sberbank will cost 20 rubles, but even before it should not have cost more, since it was closed, along with its ambitions, within one country. The people prepared money for purchases. Open trading, stop sawing shares behind the backs of private investors.

Falling scenario: fell. We are lying. We hope to get up.

Purchase: think when trading resumes. Count risks. Worse than the current situation is only war communism. 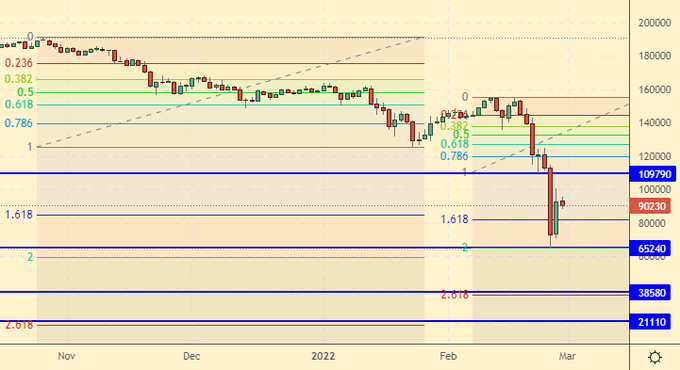