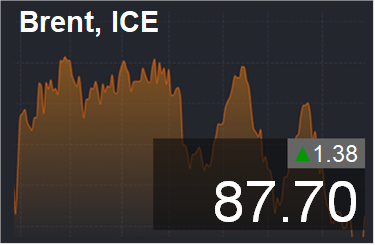 Neither the Russian stock market nor the Russian ruble wants to believe in a bright future against the backdrop of diplomatic maneuvers and scraping across the floor in Geneva, Switzerland. Everyone is a little scared, but even have a little bit fun. It hasn’t been like this for a long time.

The oil market continues to climb up, not paying attention to a possible drop in demand due to the spread of the Omicron strain. It is possible that the time for bearish sentiment has not yet come. It cannot be ruled out that the turn of the oil market will take place exactly next week on Thursday and Friday, immediately after the Fed meeting, which will be held on Wednesday.

As the Fed raises the rate, conditions for large companies will worsen, which will lead to a slowdown in economic growth and lower fuel consumption.

In confrontation with Russia, the West is unlikely to agree to a hydrocarbon trade embargo. Unless in the summer, and then for two weeks. On the other hand, the principled position implies certain losses. Therefore, one cannot be completely sure that economic expediency will come first in the current conflict. Understanding this fact makes the markets nervous.

Rumors continue to circulate in the market that China intends to further increase its food reserves in the event of an aggravation of relations with the United States. This means that there will be no surplus food on the market even with a good harvest next season. Beijing will take everything. Three trillion dollars of reserves — they have to go somewhere. Why not buy corn for some of them?

Inflation in the US and the EU will support the agricultural commodity market along with rising fertilizer prices. If we add here the nervous illness of some European politicians associated with «green» energy, it becomes clear that food will not become cheaper in the short term.

Rising energy prices increase the cost of vegetable production in greenhouses, and in some cases make it unprofitable, which threatens Europe with the loss of jobs, as well as the loss of food independence. The Turks, of course, can harvest eight crops of tomatoes a year, but for such a breakthrough, again, fertilizers are needed, and they are expensive.

At the beginning about the dollar, then we will move on to the ruble.

The meeting of the US Federal Reserve on Wednesday, January 26th will clarify how hard the Americans are going to fight inflation. They will fight a little or not notice it at all. The press, of course, is buzzing, but the financiers are much more cautious. What to hide, inflation is beneficial to the US government, and if so, then the Fed will not rush into draconian measures.

They will raise the rate, for example, in March, or maybe sometime later. But everyone is waiting. Everyone is in good shape and nervous tension in front of the monitors.

The ruble on Friday evening set a local maximum and looked up at 80.00. The policy at this stage introduces strong distortions in the exchange rate of the ruble and the value of Russian shares. If a compromise solution is found, then the national currency can go to the 65.00 region with such expensive oil, and quickly. If we continue to be in limbo, then investors will leave the ruble fearing tough sanctions from the West.

Over the past week, the difference between long and short positions of managers increased by 1.6 thousand contracts. Both sellers and buyers are in no hurry to correct their positions. The market is quiet.

Growth scenario: January futures, the expiration date is January 31. The market looks to the area of 94.20. If the movement to this level is straightforward, without a rollback to the 80.00 area, then there will be a strong overbought, which will lead to a sharp drop in prices in the future. We will not buy, we need a rollback to enter the long.

Falling scenario: from 94.20 we will definitely sell. The current hitch with the growth at the level of 87.70 is also of interest. 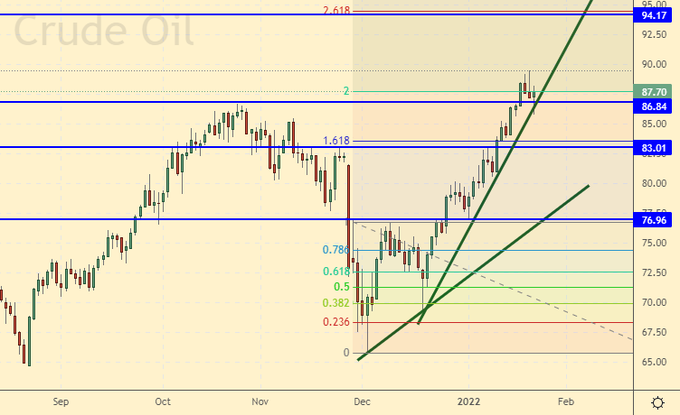 Fundamental US data: the number of active drilling rigs fell by 1 unit to 491 units.

We’re looking at the volume of open interest of WTI managers. You should keep in your mind that these are data from three days ago (for Tuesday of the past week), they are also the most recent of those published by the ICE.

Last week the difference between long and short positions of managers increased by 20.9 thousand contracts. Bulls are actively increasing their presence in WTI, which is at odds with the behavior of buyers in Brent, where they remain inert.

Growth scenario: March futures, the expiration date is February 22. No rollback, no buying. We remain on the sidelines, as we do not see convenient points for entering the long.

Falling scenario: when approaching 90.00, it is mandatory to sell. Short from current levels is possible, but it is necessary to consider the risks for capital. The 85.00 area is perceived well for the short as a whole, given the long history of recovery in oil prices. 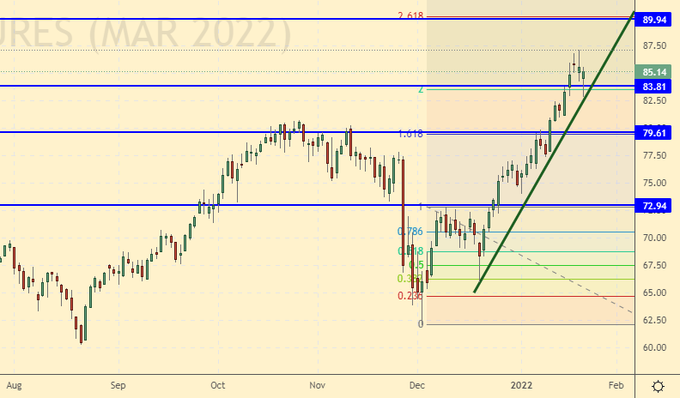 Growth scenario: February futures, the expiration date is February 10. We will not buy. Most likely, the market will reach 795.0 after which the fall will begin.

Falling scenario: shorts from current levels are possible. When approaching 800.0, it is mandatory to sell. 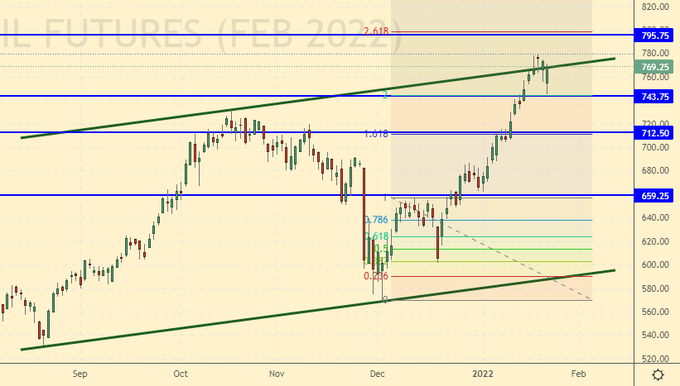 Growth scenario: March futures, the expiration date is February 24th. The picture does not deny the continued growth, therefore, we will recommend buying. EU demand for natural gas will be strong this year.

Falling scenario: we will not sell. Falls to 3.000 cannot be denied, but it will be more of a provocation than a fundamentally sound move. 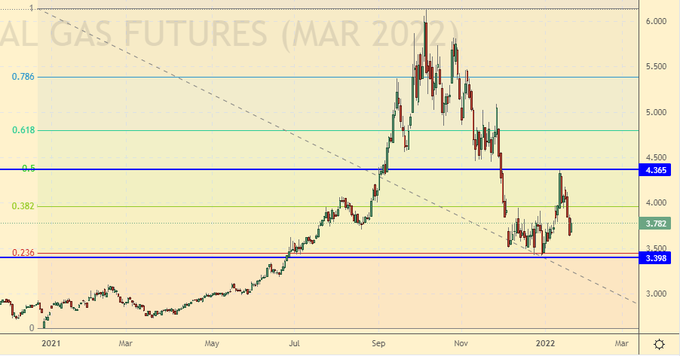 Over the past week, the difference between long and short positions of managers has decreased by 2.8 thousand contracts, while there are still more sellers than buyers on the market. The bulls were active last week. The sellers held their positions and were in no hurry to flee.

Growth scenario: March futures, the expiration date is March 14. The bulls were able to take the market above 800.0, even if only for a moment. We continue to hold longs.

Falling scenario: given the mass of fundamental problems in the grain market, we will not talk about shorts yet. 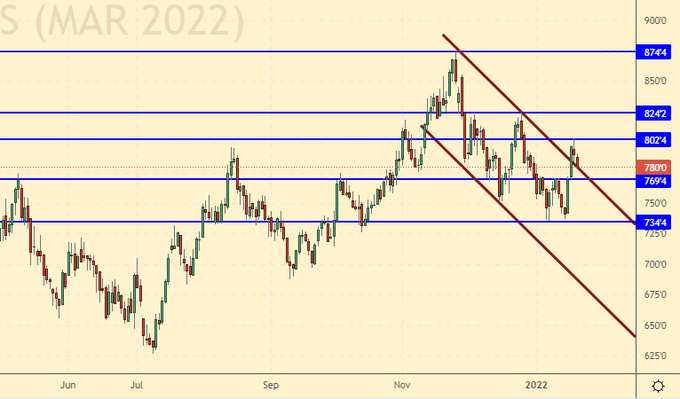 We are looking at the volumes of open interest of corn managers. You should take into account that this is data from three days ago (for Tuesday of the last week), it is also the most recent one that is published by the CME Group exchange.

Last week the difference between long and short positions of managers decreased by 15.8 thousand contracts. At the same time, there are significantly more bulls on the market than bears. Among speculators, the number of bullish contracts is 10 times greater than the number of bearish contracts.

Growth scenario: March futures, the expiration date is March 14. The market did not give us the opportunity to buy from 550.0. Long in case of growth above 625.0, it is better to work out on the 1H.

Falling scenario: we do not open sell positions. Only when approaching 685.0 will we think about shorts. 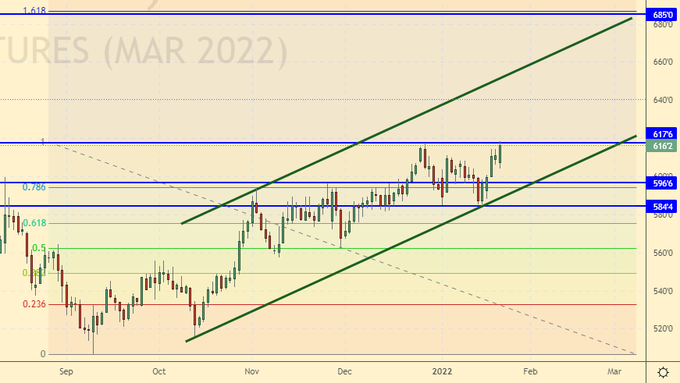 Growth scenario: March futures, the expiration date is March 14. Bulls continue to push quotes up, and we continue to hold longs. We expect the market to reach the level of 1470.

Falling scenario: we will definitely sell when we approach 1470. 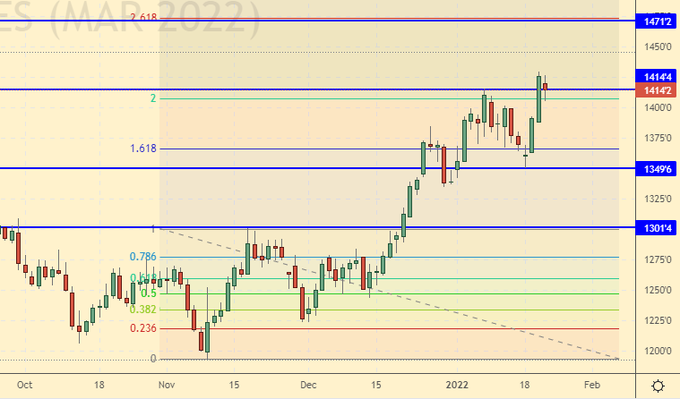 Growth scenario: March futures, the expiration date is February 28. After buying from 17.50 we keep longs. We expect a return to the level of 20.00, it is possible that we will go even higher.

Falling scenario: if we find ourselves around 20.00 again, we will think about shorts. Don’t sell. 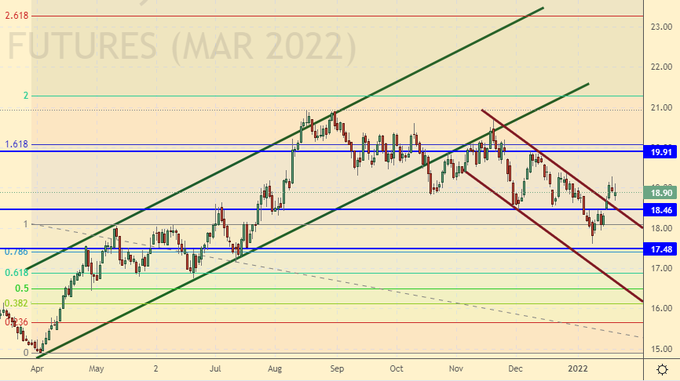 Growth scenario: March futures, the expiration date is March 21. We continue to believe that for purchases we need a fall to the area of 200.0. While out of the market.

Falling scenario: not a bad picture to sell. If you haven’t logged in before, you can do so now. Those who sold earlier hold short positions. We are waiting for a move to 200.0. 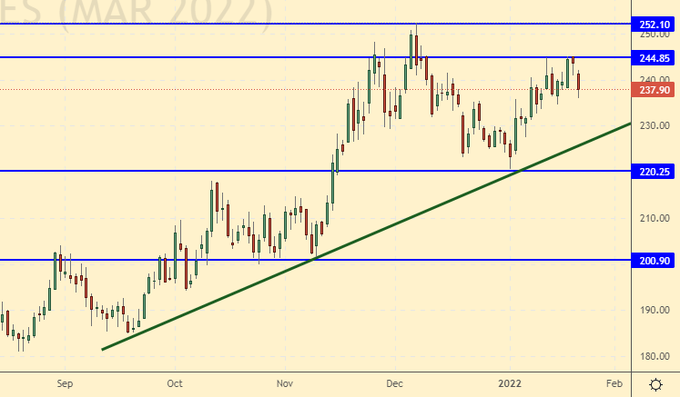 Growth scenario: we continue to hold longs. As long as the market is above 1800, nothing threatens the bulls. If dollar fans are disappointed by the Fed meeting on Wednesday, then we will continue to grow.

Falling scenario: shorting gold will be possible after falling below 1770 while out of the market. Recommendations:

Sale: think after falling below 1770. 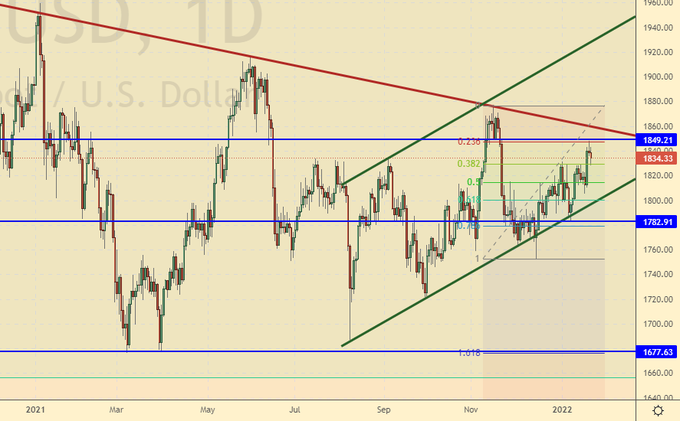 Growth scenario: after the Fed meeting, we are waiting for a hit at 1.1060, and we will buy there.

Falling scenario: if we return under 1.1300, then on hourly intervals it will be possible to work out shorts to 1.1070. We do not sell on day trips. 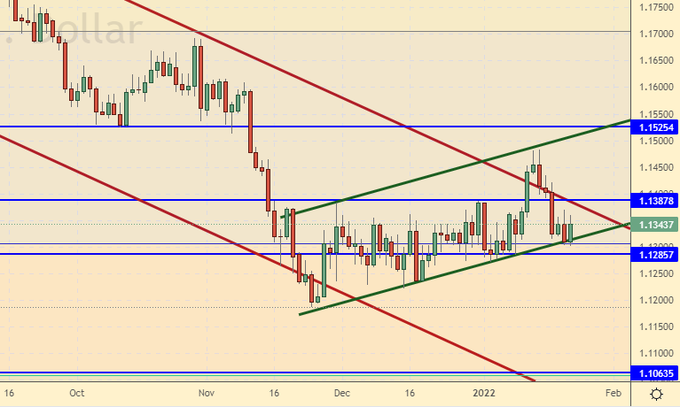 Growth scenario: we do not believe in the fall of the pair. There is no reason. First of all, there is no softening of political rhetoric. The future looks extremely uncertain at the moment. We keep long.

Falling scenario: even if oil is at $90.00 or even $100.00 per barrel until Moscow agrees with the West on new rules of the game, the ruble will remain under pressure. We do not sell the dollar against the ruble.

Purchase: no. Those in positions from 76.00, 75.20 and 74.30, move the stop to 74.10. In addition, in case of a sharp puncture to 72.00, the Central Bank may try to punish speculators by buying aggressively, but before that, carefully analyze the current news background. If the news is positive for the ruble, don’t go long on the dollar. Without taking into account the political factor, the ruble is now undervalued.

Sale: think when approaching 80.00. A short is possible on the 1H, provided that the news background becomes calmer. 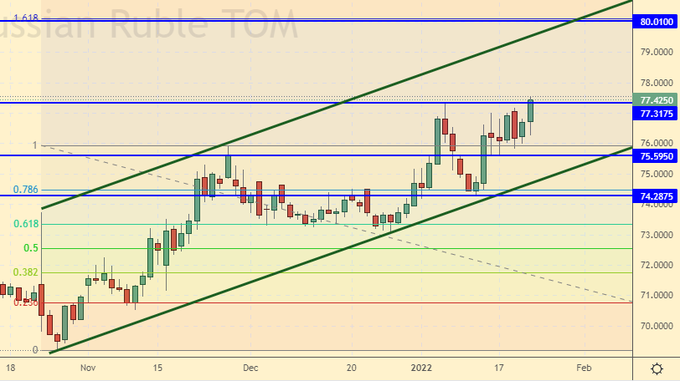 Growth scenario: «There is no growth scenario now and there cannot be,» we wrote a week earlier. Five more trading days have passed, plus the weekend. The positive has not increased. From a technical point of view, one could go long here. Let’s take a look at Monday. If it is green, then you can buy it at the 1H. We do not open a long buy position yet. Note that the US stock market has not really begun to fall yet. When the RTS index moves up, there will be too many obstacles, both political and fundamental.

Falling scenario: they will talk to us, this is already evident. The only question is in what tone. Hardly very formidable. The big game has begun in Europe. The Russian economy may suffer from sanctions from the EU and Washington, so investors are forced to take into account the negative developments at this stage. Let’s keep the shorts. We have targets below at 103000 and 80000. 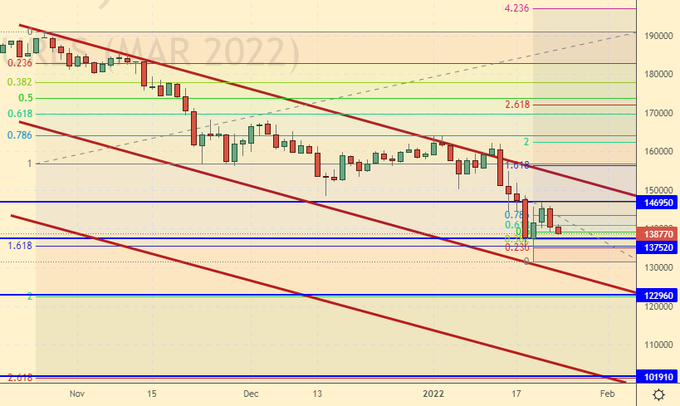