Электронный журнал Oil.Эксперт
Price forecast from 6 to 10 of September 2021 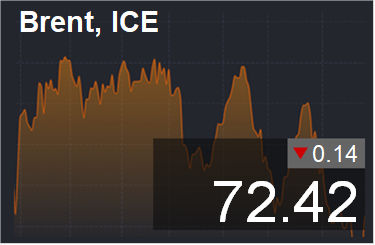 The wise men from OPEC, as well as our comrades who joined them, did not rock the boat, but rather the oil platform, indicating their desire to further increase production by 400 thousand barrels per day every month. Against the backdrop of a reduction in the supply deficit from OPEC + and comfortable prices for the development of hard-to-reach deposits, market quotations were unable to continue their ascent.

It cannot be ruled out that we will see another corrective move on the market. Now in the area of $ 60.00 per barrel for Brent.

The disappointing data on the US labor market, released on Friday, may sow a seed of doubt in the heads of notorious dollar cultists, as the economic recovery, which Mr. Powell talked about so much, will continue to proceed according to an extremely flat scenario. During the month, only 250 thousand of new jobs were created. That is, the mountain in August could not even give birth to a mouse.

We will receive the impact of Hurricane Ida on oil and gasoline reserves in the United States in the coming week. The data will most likely be able to support prices, but will not be able to force the market to rise.

Wheat is potentially poised to outperform corn and soybeans due to strong demand from both domestic markets in producing countries and foreign markets such as North Africa and Asia.

Export duties on wheat in Russia, as well as a decrease in gross harvest in Canada and Germany, create preconditions for wheat prices to remain high compared to the previous five to six years, throughout the 21/22 season.

Judging by the last tender, when Egypt bought wheat of Ukrainian and Romanian origin at $ 340, including freight, we can state that buyers are frightened by a possible shortage of supply in the autumn months. Note that for the first time in 10 years, the price of bread in Egypt rose in retail.

Traders have nowhere to rush, provided that there is grain storage capacity. There will be supply on the market, but no one will seek to sell wheat at any price. Market demand will remain high throughout the season.

On Friday, the 10th, a regular meeting of the Bank of Russia will be held. Inflation accelerated to 6.8% per annum. This fact could force Nabiullina to raise rates again by 0.25, possibly by 0.5 percentage points. The more aggressive the rate rise, the clearer the signal will be sent to the market that the Bank will not put up with the growth of inflationary pressure.

Weak Friday statistics on the US labor market pushed the talk of a rate hike in the US into the distant future. Powell wants the economy to look healthy and beautiful across the board, but the job market continues to hurt. Fans of the dollar will now find it much more difficult to come up with reasons to buy American currency.

Over the past week, the difference between long and short positions of managers increased by 28.3 thousand contracts. In fact, we see that the pressure of the bulls did not lead to success. Prices failed to rise in a week, which could sow panic among buyers.

Growth scenario: September futures, expiration date September 30. We will only think about buying after a rise above 74.00. It is desirable that not an hour, but a day closes above this level.

Falling scenario: «to enter a short, it is better to wait for confirmation in the form of a long red daily candle», we wrote a week earlier. Tuesday of last week should have pulled you into short. We are on sale, we do not open new deals at the current levels.

Purchase: think after rising above 74.00. 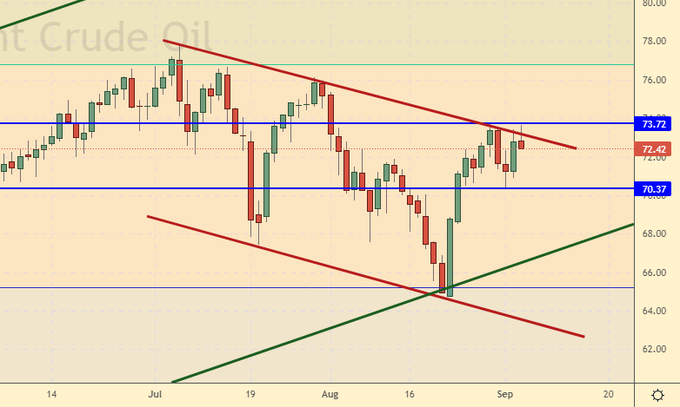 Fundamental US data: the number of active drilling rigs fell by 16 units and is 394 units.

We’re looking at the volume of open interest of WTI managers. You should keep in your mind that these are data from three days ago (for Tuesday of the past week), they are also the most recent of those published by the ICE exchange.

Over the past week, the difference between long and short positions of managers decreased by 1.2 thousand contracts. The rise in WTI prices in fact did not receive support from speculators, which led to a slowdown in the ascent. Continuing growth is questionable.

Growth scenario: October futures, expiration date September 21. The current shopping situation is not attractive. The market can draw us one more corrective branch down. While we are below 73.00, we are out of the market.

Falling scenario: the current levels are attractive, but one cannot exclude a rise in prices to 72.10, so we will wait for confirmation of a downward reversal before selling.

Purchase: think after the market rallies above 73.00.

Sale: after the appearance of a red candle with a long body. Stop above the high of this candlestick. Target: 58.33. 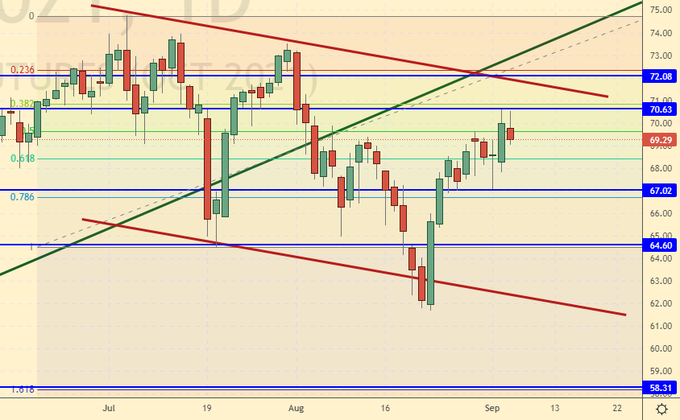 Growth scenario: October futures, the expiration date is October 12th. It’s clear that Hurricane Ida in the United States forced a number of refineries in Louisiana to shut down. Nevertheless, the continuation of the rise in prices does not seem necessary.

Falling scenario: we continue to believe that if the market turns down, it makes sense to sell. We will consider a fall in prices below 595.0 as a sell signal. 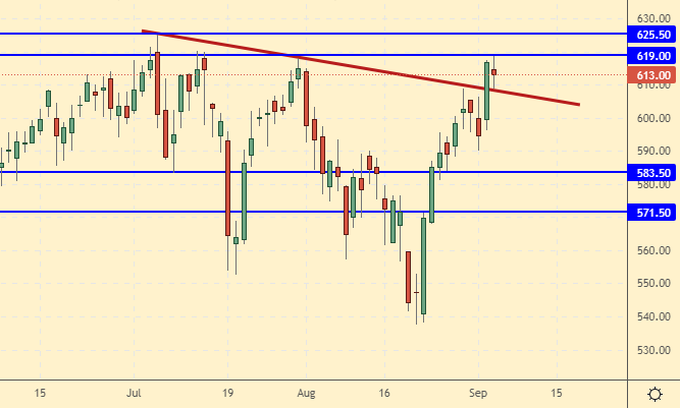 Growth scenario: October futures, expiration date September 28. Gas prices are likely to continue to rise as Europe is now extremely vulnerable to the onset of a new cold season with half-empty storage facilities. It is possible that Gazprom will hold back supplies to the EU for the time being in order to force the European bureaucrats to sit still and not interfere with the completion of Nord Stream 2.

Falling scenario: too early for short. After the launch of Nord Stream 2, something may change. Recommendation: 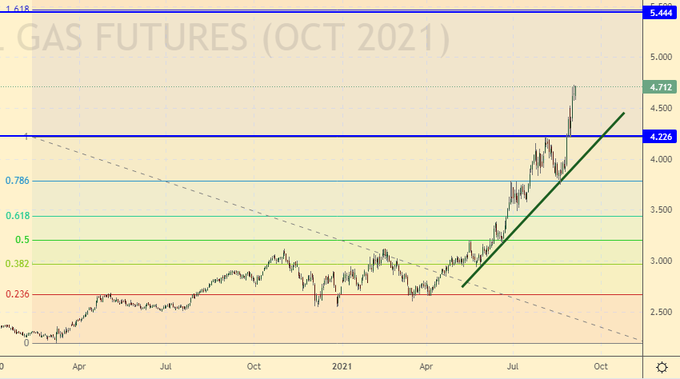 Over the past week, the difference between long and short positions of managers decreased by 0.3 thousand contracts. The activity of speculators is at a low level. Note that sellers have another week, after which a bull attack will follow with targets at 925.0 cents per bushel.

Growth scenario: December futures, the expiration date is December 14. We don’t want to fall. The moment when the market starts to rise should not be missed. We will recommend buying after a rise above 750.0.

Falling scenario: the bears were unable to earn money against the background of a new harvest. High demand for wheat does not imply low prices. We do not sell. 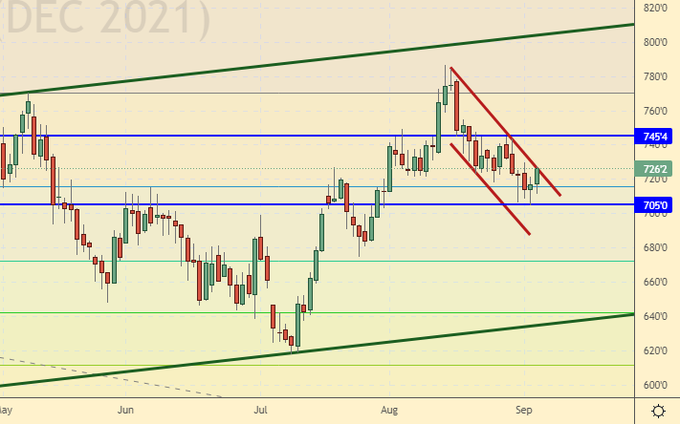 Over the past week, the difference between long and short positions of managers decreased by 12.1 thousand contracts. Sellers put pressure on prices slightly. This pressure led to the fact that we came close to the long-term support line at 515.0 and are ready to break it down.

Growth scenario: December futures, the expiration date is December 14. Not bad levels for shopping. Do not take large volumes, sellers can still push the market down. 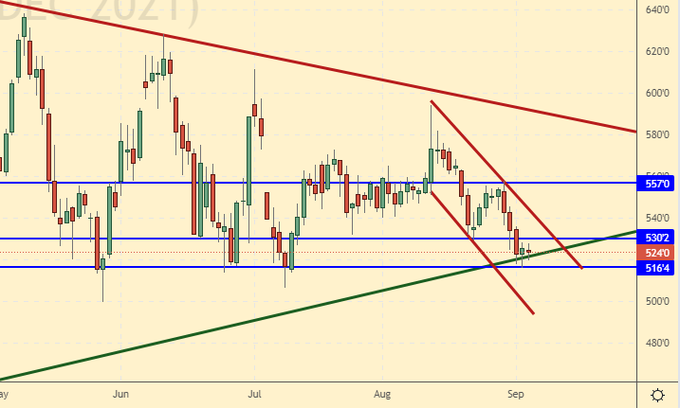 Growth scenario: November futures, expiration date November 12. We will buy from the current levels. Fundamentally, things are good for soybeans, but wheat may go up, which will provoke growth in other crops.

Falling scenario: continue to stand in shorts. Focusing on the level 1111.0. Sellers have one week to break below 1260.0 for sure. 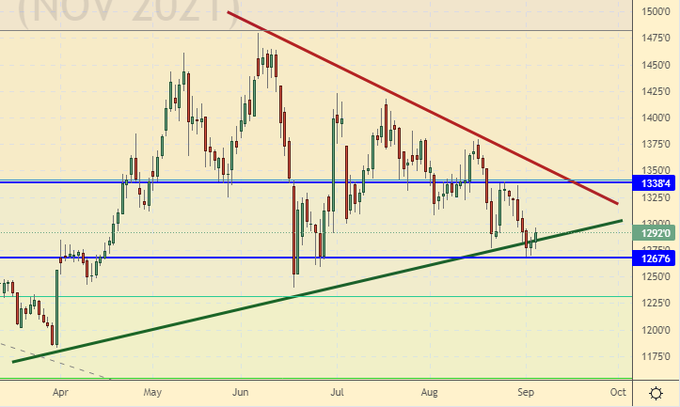 Growth scenario: October futures, the expiration date is September 30. A week is left for the bears. We will refrain from new purchases. We keep the old positions.

Falling scenario: in case of falling below 19.35 — sell. Prices may go to the lower border of the aggressive ascending channel around 18.00. Recommendation: 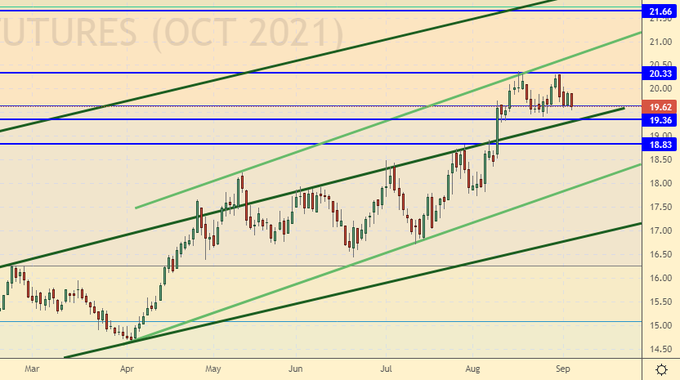 Falling scenario: selling from current levels is interesting from a technical point of view. Let’s go in short. 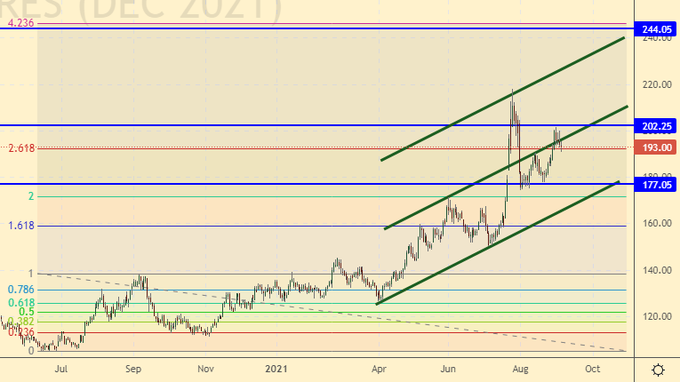 Growth scenario: Powell’s weak speech at the end of August was supplemented by weak data on the labor market at the beginning of September. It cannot be ruled out that gold will continue its upward trend. We stand in longs.

Fall scenario: don’t sell again. Most likely, the market will continue to grow. 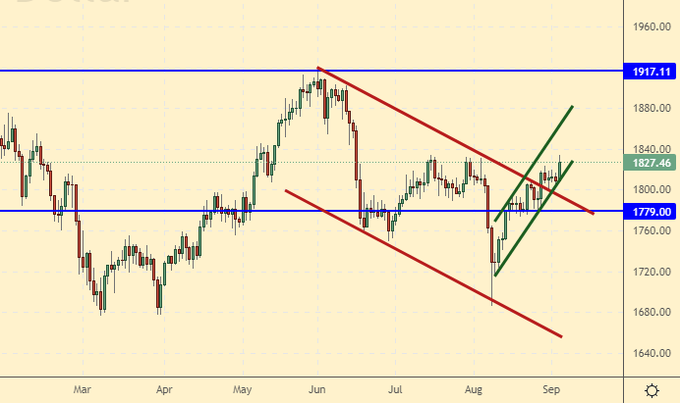 Growth scenario: it is possible that we will see a pullback to 1.1800 for the pair, but in the future the dollar will remain under pressure, as bullish fundamental events for the US currency are not expected.

Falling scenario: possible short from current levels with little risk. Larger bets can be made when approaching 1.2100. 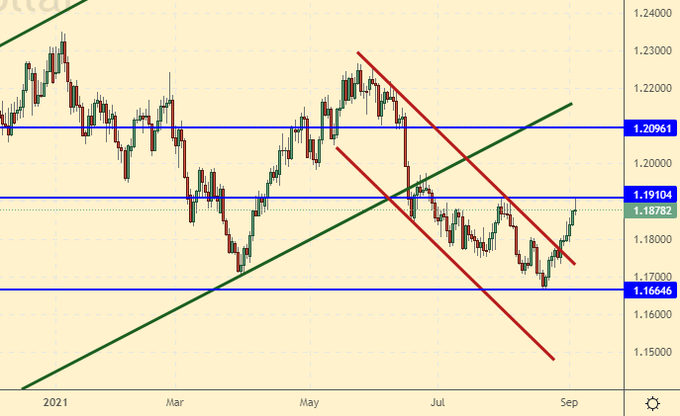 Growth scenario: the market was negative about the weak data on unemployment in the US. It is difficult for the dollar to offer anything at this stage. The Fed meeting is on September 22, but it is unlikely to say anything good for the American currency. We will refrain from shopping.

Falling scenario: we will keep the short opened two weeks ago from 73.90. The target at 67.60 is visible. At a meeting of the Central Bank of the Russian Federation on Friday, the rate may be raised again, which will strengthen the ruble’s position. 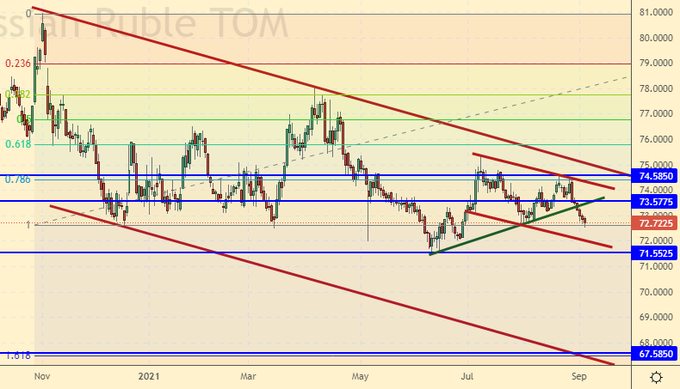 Growth scenario: strong ruble and high oil prices, what else does the Russian market need to welcome the fall of 21 beautifully? Most likely, the RTS index will go to 175000. We do not discount the possibility of a stronger growth to 200000. All Pinocchio’s of the planet should come to the field of miracles. Stocks are always going up. Everyone knows this, and nothing bad can happen.

Falling scenario: the stock market is able to continue its growth without a rollback, not from a big mind, but from the pressure of free money, which simply has nowhere to go now. It’s not safe to sell. Those interested can carefully look for opportunities to enter the short in the region of 175,000. 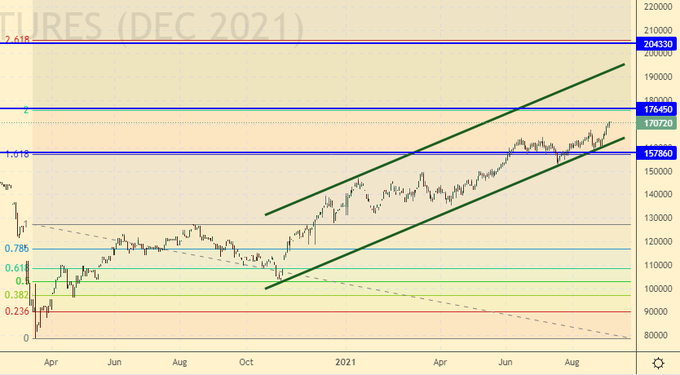