Электронный журнал Oil.Эксперт
Price forecast from 10 to 14 of May 2021 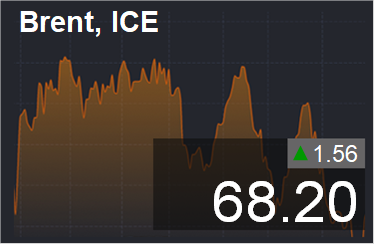 Since Biden took office, people in the USA has bought 16 million weapons. This year promises to break the previous sales record. The price of shells in stores has increased by 200 percent. The situation in society can hardly be called healthy. It got to the point that the total shortage of ammunition makes the police save on practice shooting.

This fact shows us the growing nervousness in society, and the pandemic is only partly contributing here. The purchase of weapons and ammunition can be explained by Biden’s desire to make life difficult for the owners of weapons, but the roots are still deeper.

It is unlikely against such a background that we should expect further growth in the consumption of anything in the coming years, including gasoline in the United States. The percentage of people storing ammunition, food, gold and saving money for a rainy day has grown significantly. For example, assistance received from the government this spring was used to repay loans and savings by 70% of the population, and a year earlier no more than 30.

Further growth of the oil market should be based on growing demand and consumer confidence in the future. Today there is an increase in demand, but there is no more confidence.

The centerpiece of the year is next week: the release of the USDA report with the first estimates of gross receipts for the 2021/2022 season. The cereal market is currently at multi-year highs, which makes us speculate about a possible correction after the release of the forecast for a new harvest on Wednesday 12th.

Given the uncertainty over the chinese virus, it can be assumed that the demand for grain this year will be at its maximum. Therefore, there is no need to talk about any drop in prices this summer and autumn. All that consumers can count on is a 15 — 20% correction by August from current levels, and this is only if the weather does not fail.

In addition, the human factor should be taken into account. In the event of a rise in prices, no farmer in his right mind will sell grain to traders. This means that in the market, in addition to the natural deficit, an artificial one can be added in the fall.

By reading our predictions, you could have made money in the coffee market by moving up from 135.0 to 158.0 cents per pound.

The new US administration will have to walk on thin ice. On the one hand, the Democrats should not allow the loss of confidence in the dollar in the world, and on the other hand, it is already impossible to do without printing new portions of money.

If the rejection of the dollar in international trade becomes systemic, then the ruble in this situation can win. Moscow is not capable of comparing with Beijing or Brussels in terms of its economic power, so the ruble should not be expected to expand globally, but the ruble is quite capable of becoming a stronger commodity currency on a par with the currencies of Australia, Canada and the Scandinavian countries.

We see a slight flight of sellers, a slight increase in the number of buyers. There is not enough significant news for active action on the market. The market has risen in a week, but we cannot talk about the total advantage of the bulls.

Growth scenario: May futures, the expiration date is May 28. We continue to refrain from shopping. Of course, in the event of strong inflation in the United States, prices will go up, but it is too early to speculate about such a scenario.

Falling scenario: wait for a fall below 67.00 and sell. Summer growth in gasoline demand is already in price. It is unlikely that the bulls still have trump cards. 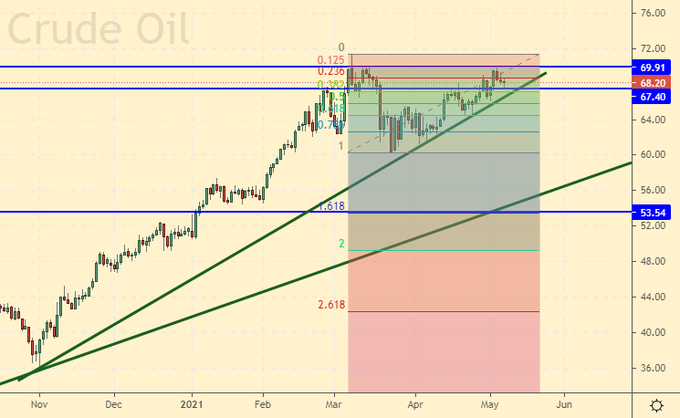 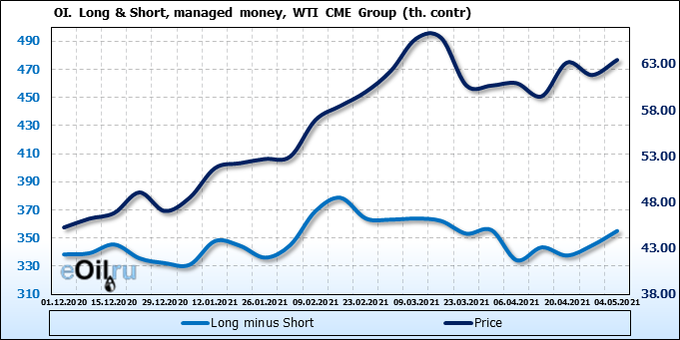 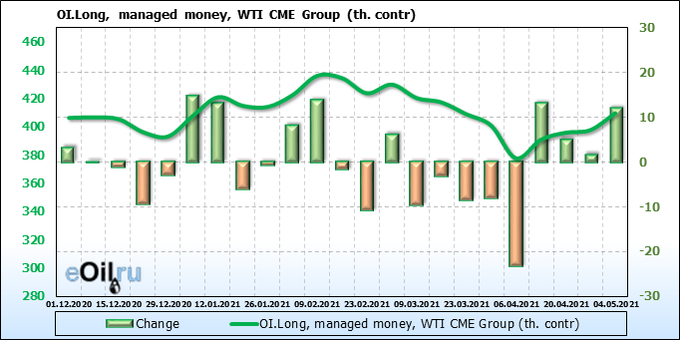 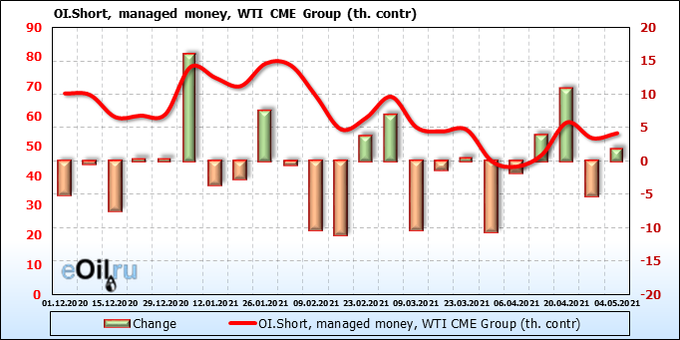 Fundamental data from the USA: the number of active drilling rigs increased by 2 to 344.

Unlike Brent, WTI buyers are more active. Purchase positions are being built up for four weeks in a row. Therefore, it is quite natural to expect a decline in the activity of the bulls now.

Growth scenario: June futures, expiration date May 20. Buyers have a target at 72.20. However, the probability of visiting this level is better to work out on 1H. Entry on daily intervals looks belated.

Falling scenario: if it falls below 64.00, it is worth selling. Structurally, the market is able to return to 46.00. 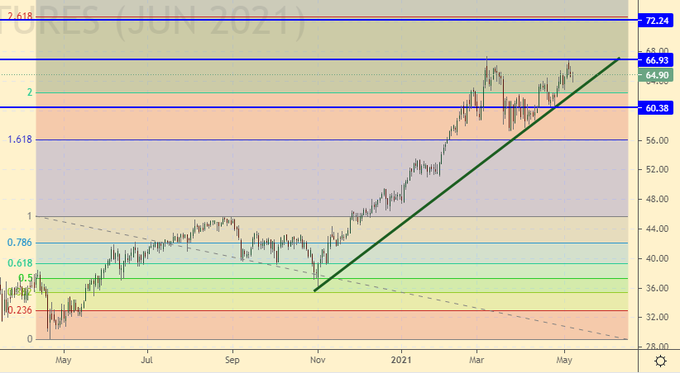 Growth scenario: June futures, expiration date June 10th. We continue to wait for the market to fall. We do not buy.

Falling scenario: the bulls are trying to regain the initiative, but the success of the past week looks very modest. If the market falls below 545.0 — sell. 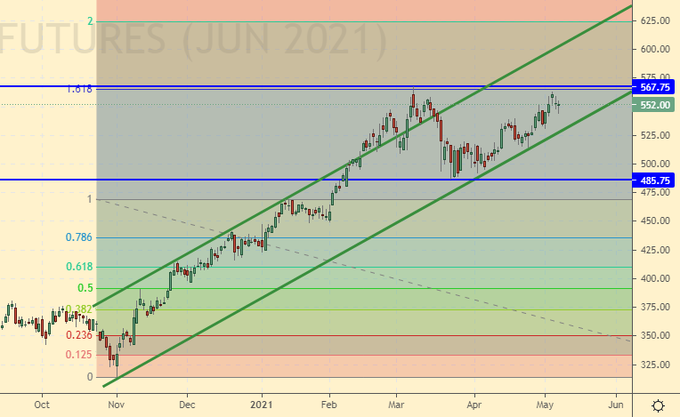 Growth scenario: June futures, expiration date May 26. Gas purchases in Europe are in full swing. Most likely, the rise in prices will continue. Any rollbacks can be used to build up longs.

Falling scenario: we are patiently waiting for the price to arrive at 3.500. We will think about sales there. 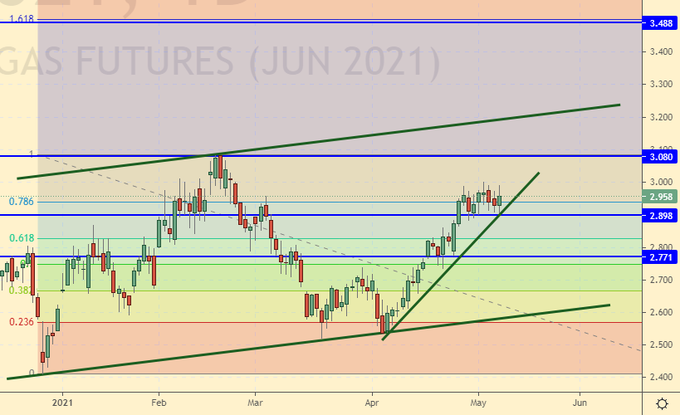 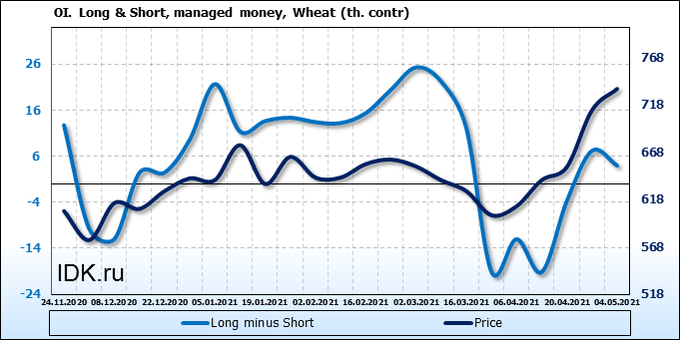 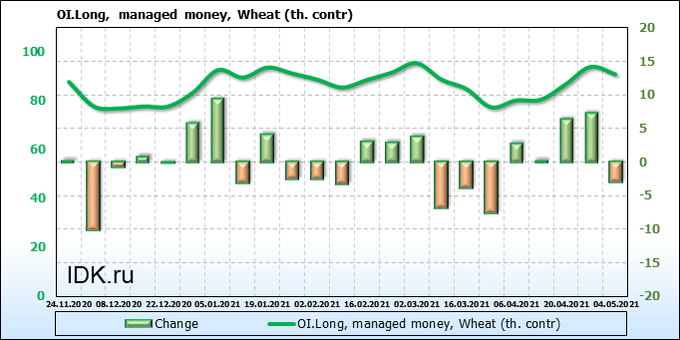 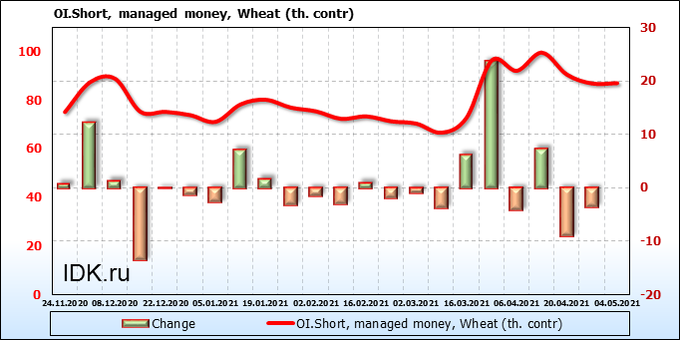 There are fewer bulls on the market. But the number of sellers remained the same. We continue to think that a correction in the wheat market is not far off.

Growth scenario: July futures, expiration date July 14. We have almost reached our Fibonacci target around 780.0. Now we will wait for a rollback. If the market takes the 800.0 level without correction and goes above it will be an unpleasant surprise.

Falling scenario: sell here. Yes, there will be increased volatility on Wednesday due to the USDA report. You need to be ready to enter sales up to 800.0. You can wait for a long red candlestick to appear on the 1H before entering the short. 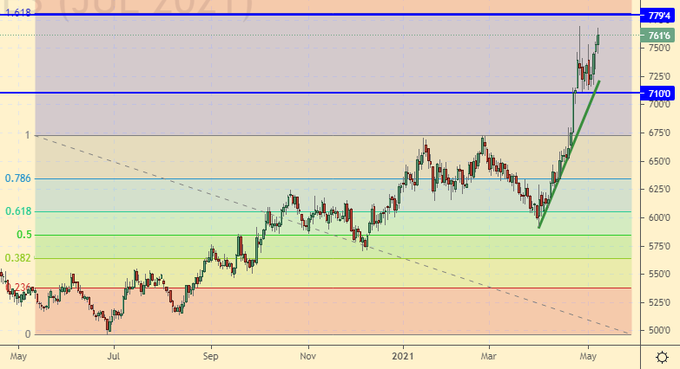 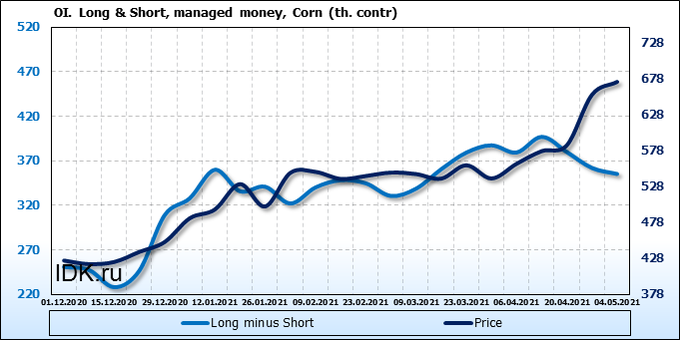 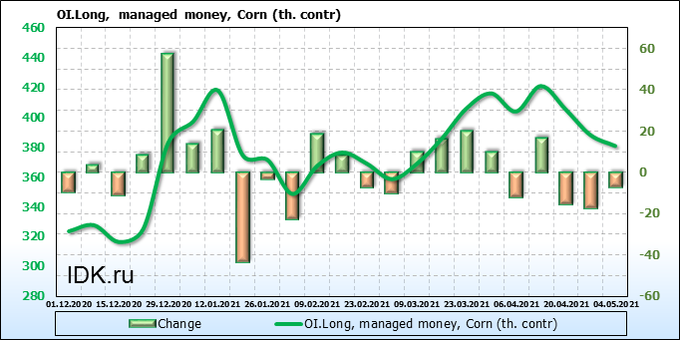 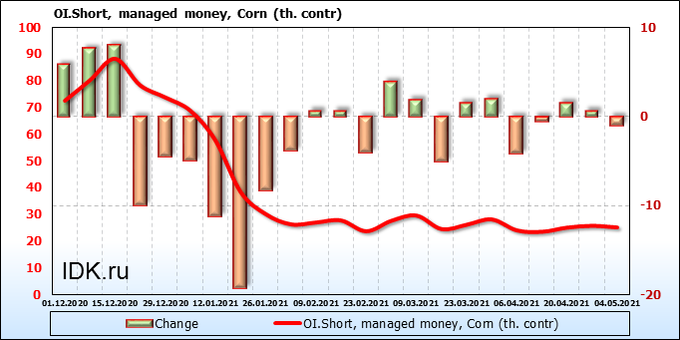 Prices are rising, and speculators are reducing their activity. The market is getting thinner. Most likely we will face a deep and sharp pullback on Wednesday and Thursday.

Growth scenario: July futures, expiration date July 14. Prices are at their highs. We do not buy and waiting for a rollback. If not, then we will look for other opportunities in other markets.

Falling scenario: here you can start selling. It is possible that there will be provocations that end in long upper candlestick shadows. Passing above 770.0 is highly undesirable. 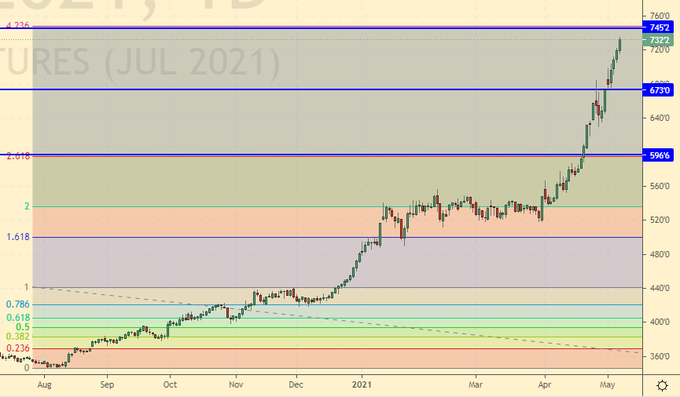 Growth scenario: consider the July futures, expiration date July 14. The market is not rolling back. On the one hand, this is good for the long, which we opened a few weeks ago, but on the other hand, the unidirectional upward movement creates overbought and nervousness, and the main thing does not allow this very long to grow. We stand in the purchase.

Falling scenario: when approaching 1785 — sell. We are growing too fast. Too much. 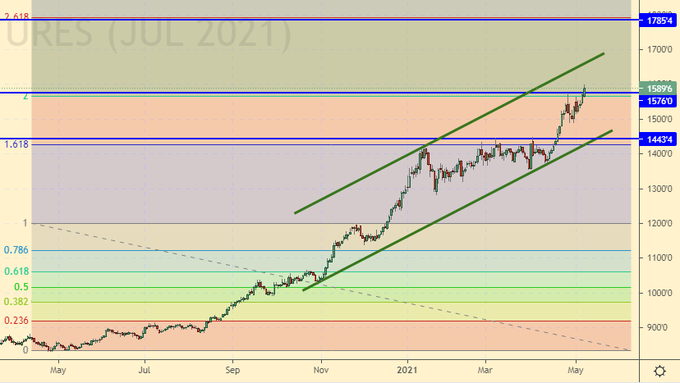 Growth scenario: consider the July futures, expiration date June 30. They did not fall. We reconsidered the situation somewhat. The current Fib levels look better than the previous ones. We see that there is nowhere to grow further. We do not buy. We are waiting for a rollback.

Falling scenario: we will sell here. Growth above 18.50 looks unnatural for now. 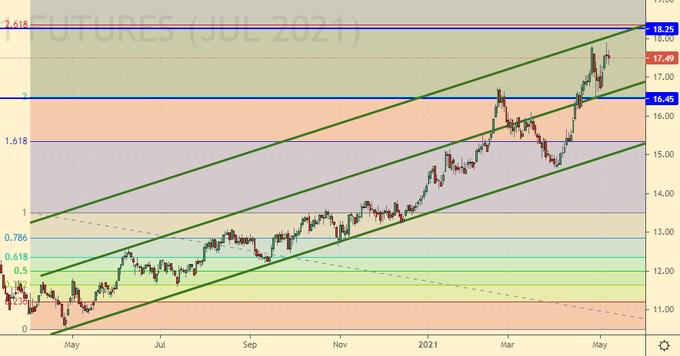 Growth scenario: consider the July futures, expiration date July 20. “The market is able to go to 158.00, especially since this level is close to the average value for coffee over the past few years,” — that’s what was written in the previous forecast. And so it happened. We don’t think here anymore. We take profit.

Falling scenario: sell here. It is unlikely that we will go above 160.0 without a pullback.

Purchase: no. All with a profit. 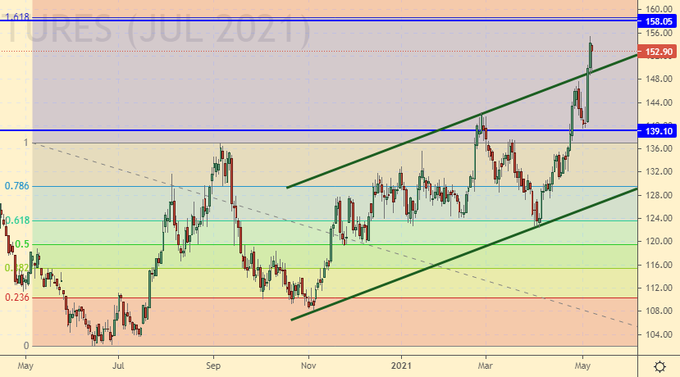 Growth scenario: we continue to hold longs. So far, everything is going well. There are fewer and fewer doubts that we will reach 1880. A rollback to 1780, if any, can be used to build up positions.

Falling scenario: don’t sell yet. The situation could change so that gold will head towards 2240 amid the weakness of the Biden administration and the fever in the American labor market. 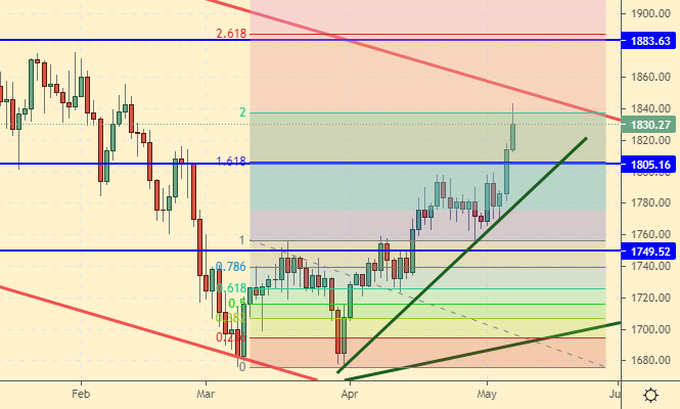 Growth scenario: data on the number of new jobs outside the agricultural sector in the US was released on Friday. The result of + 266 thousand turned out to be weak. We expected an increase of 978 thousand. The dollar is unlikely to be strong in the coming months. The pair returned to the idea of visiting 1.2800.

Falling scenario: short in this situation looks extremely provocative. We do not sell. 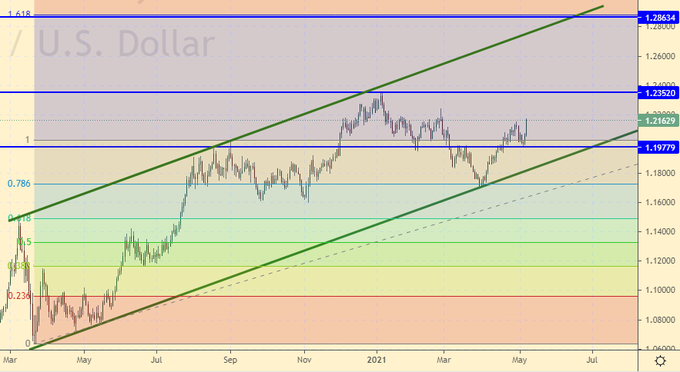 Growth scenario: if the dollar’s business on the world stage is going very badly, then we can hardly count on the growth of the pair. The Fed will continue its soft monetary policy, as the situation in the US labor market is far from normal. The number of initial applications for unemployment benefits of more than 500 thousand per week clearly indicates to us the weakness of the economy.

If the Kremlin does not make sharp movements in foreign policy, this could have a positive effect on the ruble exchange rate.

In the current situation, we are not buying dollars. Only the return of the pair above the level of 75.00 will give a reason for buying.

Falling scenario: there are prerequisites for a fall to 71.15. Shorts are possible here. Let’s hope that the lack of demand for currency this summer, since there will be no tourist season, will play into the hands of the ruble.

We see a sharp drop in quotations for the USDRUB_TOM pair with the start of trading at 7:00 Moscow time by two rubles. Then return. There was nothing like this on the USDRUB_TOD pair and on the futures. Such things need to be investigated and made public. There should not be any coordinated attacks by several traders, especially within one second. There is probably a victim in this story. 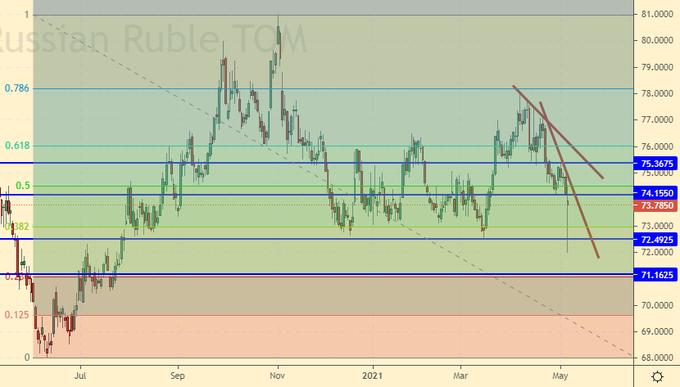 Growth scenario: the market looks surprisingly good. After it became clear that the Fed would not raise the value of money, investors came back to the stock market. Some of these funds also go to Russia.

An additional doping for the growth of the Russian market may be the tension in relations with the West. It cannot be ruled out that part of the money that was previously withdrawn abroad now remains inside the country and is spent on the purchase of shares. 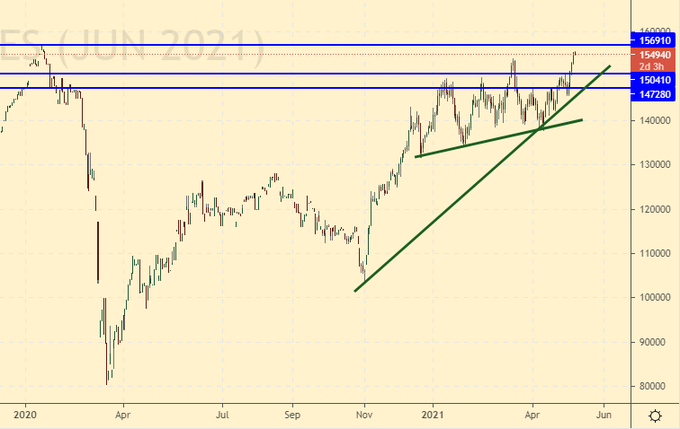