Электронный журнал Oil.Эксперт
Price forecast weekly from 21 to 25 of December 2020 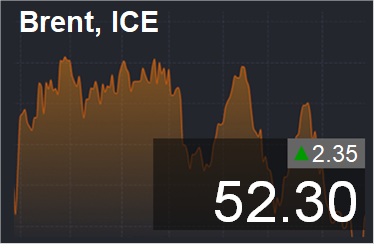 Current oil market growth can hardly be explained fundamentally. Nobody looks at the fall in people’s incomes, at the drop in GDP in Europe to 7% (latest estimates), at the fact that gasoline has already begun to be poured into tankers off the coast of Holland, because there is nothing to do with it.

It is possible that speculators are thrilling to push the market to 56.00, but then what? Will prices go down again only when there is no more storage space? So far, there is no hope for a recovery in demand. Quarantine and restrictions are everywhere. If, at the same time, OPEC will also increase production by 0.5 million barrels per day every month, starting in January, then we should expect a strong reversal at the «X» hour and a fall in prices to indecent depths.

Reading our forecasts, you could make money on the oil market by taking the WTI move from $40.00 to $48.30 per barrel.

The wheat market does not want to discharge itself yet. Prices remain at good levels for sellers. This is partly due to the pandemic, and partly to the condition of winter crops.

There is very little snow in the fields in the Volga region, and this is against the background of almost 20 degrees below zero. The negative for winter crops is immediately a decrease in the gross harvest of wheat by 10 million tons for Russia next year to the level of 75 million tons.

Given that the pandemic is forcing all countries to replenish and expand food supplies, we can see an increase in demand for wheat in the new year and even the emergence of some artificial shortages. Note that carryover stocks are estimated at 316 million tons, so the world will be able to afford a slight drop in gross harvest next year.

The Bank of Russia left the rate unchanged at 4.25%. This was expected, as inflationary pressures increased due to higher food prices. So far, the ruble has regained some of its lost positions, which suggests a halt in the rise in prices for imported goods. However, if the national currency continues to weaken, the Bank will be forced to raise the rate, as inflation will accelerate its growth.

As long as oil prices are above 50.00, Russia can easily manage with small borrowings and will be able to fulfill the budget for next year. But if the price of hydrocarbons falls in the current extremely unfavorable economic conditions, the ruble will have little chance of strengthening against the dollar.

Bulls continue to press, although their activity begins to subside on the eve of Catholic Christmas. We do not expect an influx of money into the market in the next two weeks. If there is any upward movement in the market, we will evaluate it as false.

Growth scenario: December futures, expiration date December 31. We see growth. Moreover, it is aggressive. The movement is not backed by anything other than the expectation of relief from the start of a vaccination campaign in a number of countries. Possible continued growth can be worked out at hourly intervals. To buy on the daily chart, we need a downward correction.

Falling scenario: prices rise aggressively. While we are under 53.00, it makes sense to look for opportunities for selling in the event of a long red candle, as the market is overbought. 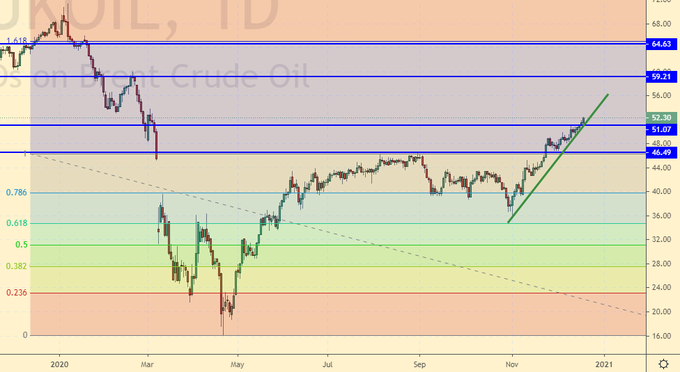 Fundamental US data: the number of active drilling rigs increased by 5 units to 263 units. 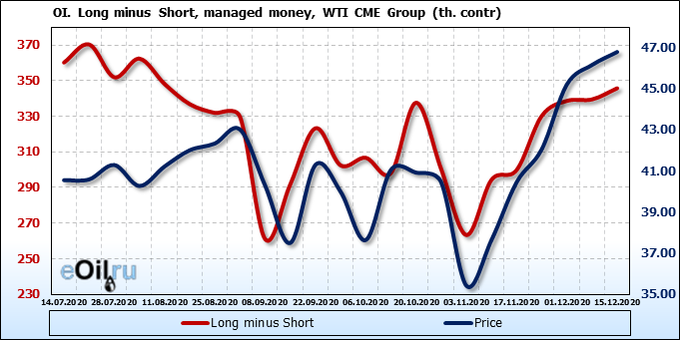 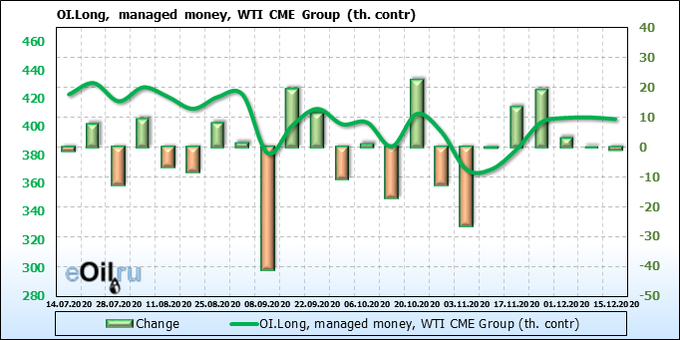 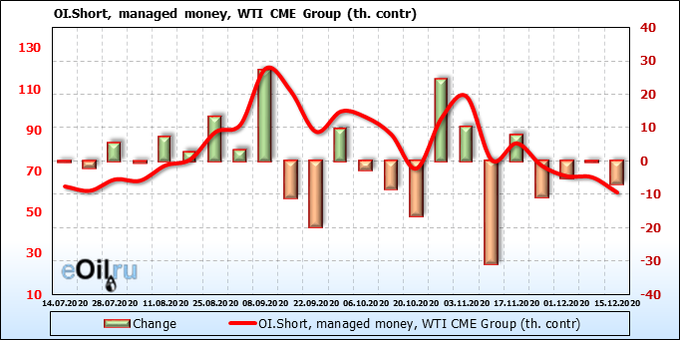 We see the outflow of speculators’ money from the market. We will now wait for an increase in activity only after the New Year. December 25 falls on Friday. The week will turn out to be blurry because of the holiday. Thus, next week’s price spikes should not be taken as an independent signal. Look for the rationale for emerging movements in the news.

Growth scenario: February futures, expiration date January 20. We took our target at 48.30, further growth is perceived as something exaggerated. If you buy, then only at hourly intervals.

Falling scenario: can the market go above 50.00, that is the question. We recommended last week’s sales up to 50.00. The one who entered stands. We do not make new attempts to sell. The green Friday candle is scary.

Purchase: no. All with a profit. 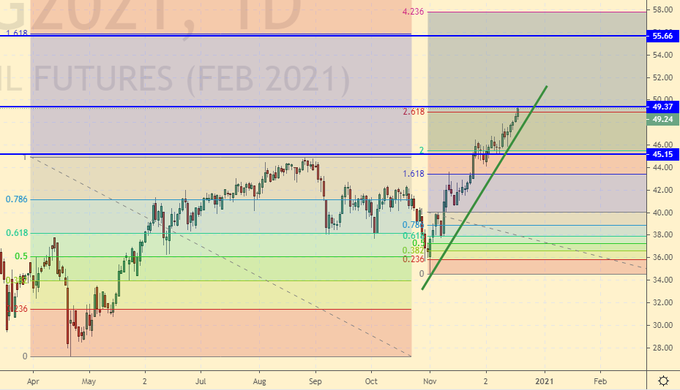 Growth scenario: January futures, expiration date January 12. There is no point in buying at the current levels. Out of the market.

Falling scenario: you can sell by approaching 440.0. It is possible that the market will roll back after the close of the March gap. Cautious traders are waiting for a long red day.

Sale: think after the red day appears, while we are under 440.0. 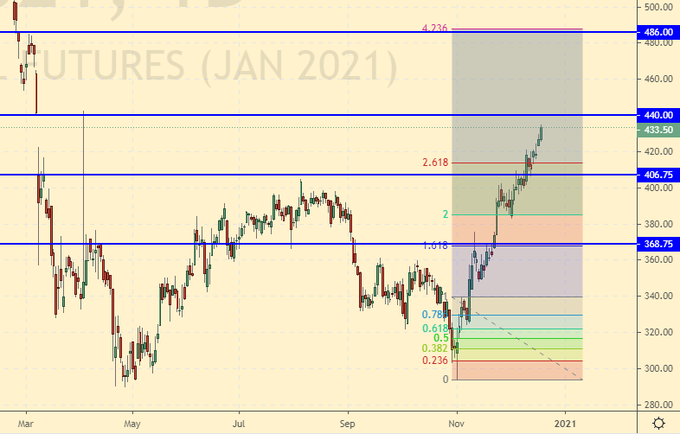 Growth scenario: January futures, expiration date of December 29. We continue to wait for growth above 2.800. The current rebound is interesting, but due to the large volume of gas offered for sale, including LNG, one cannot expect a strong rise in prices.

Falling scenario: I don’t want to go short in winter. Most likely, the market will be in the 2.500 — 3.000 corridor for the next three months. 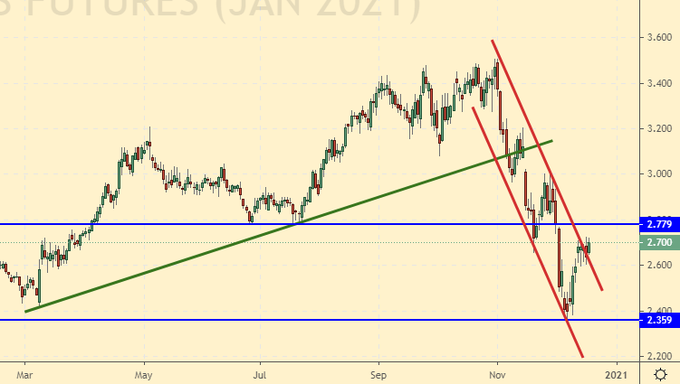 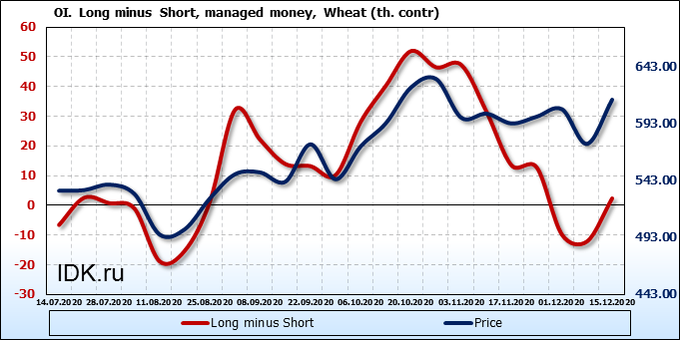 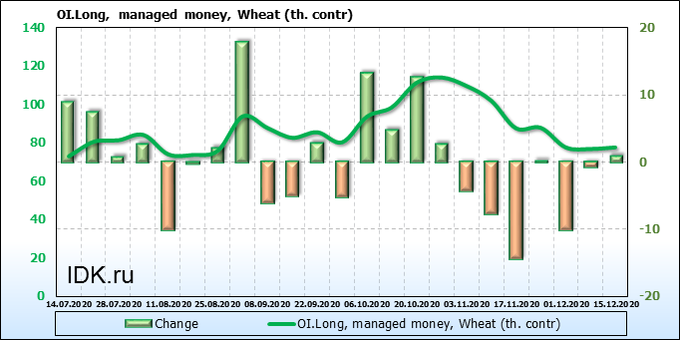 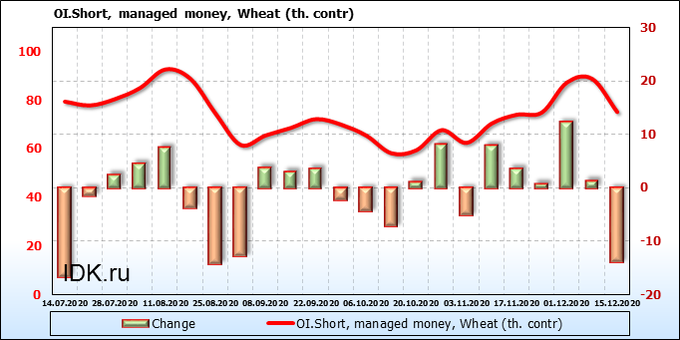 The speculators and sellers fled. As a result, the market grew even without fresh money flowing into longs. Most likely, on the eve of the Christmas holidays, trade will become less active.

Growth scenario: March futures, expiration date March 12. In case of growth above 625.0, you can buy. In terms of technology, the market could grow to 670.0. I would not want to miss this move.

Falling scenario: as buyers continue to press, we will get out of the shorts and wait for the situation to clear up. Only in case of return under 595.0 will we sell. Recommendation:

Purchase: think after rising above 625.0.

Sale: no. Close all shorts. 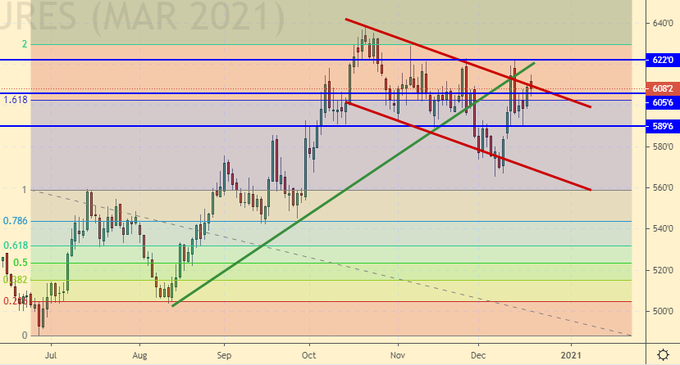 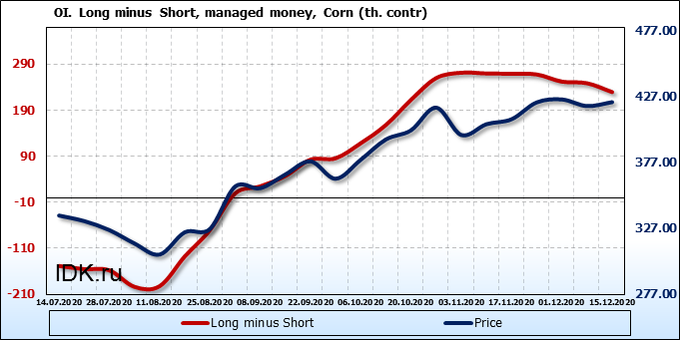 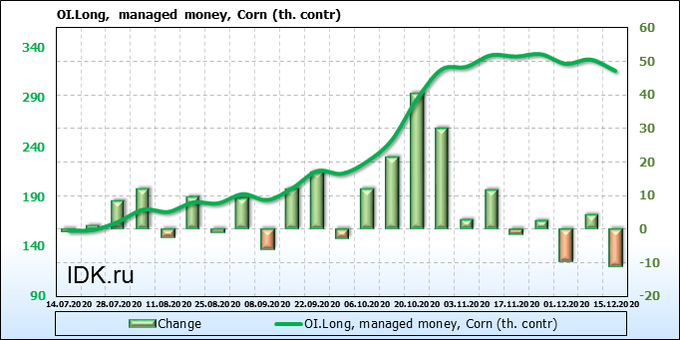 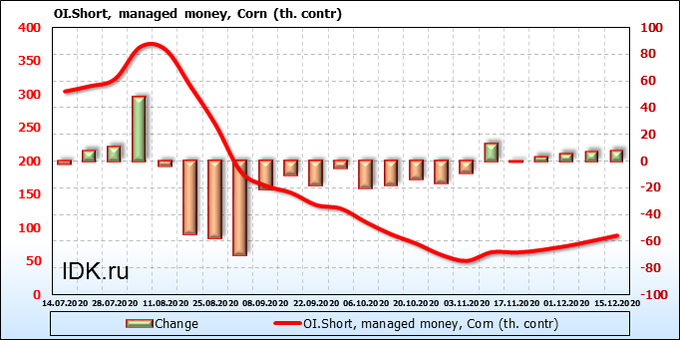 The sellers tried to gently push the market, but in fact they did not succeed. Prices are at their highs again. The market is capable of showing rapid growth next week against the background of preparations for the Christmas holiday.

Growth scenario: March futures, expiration date March 12. We will not do anything on daily intervals. If prices rise above 440.0, you can consider buying opportunities at the “hours”.

Falling scenario: the market did not allow us to make money on the sale. We take a break. The next level of interest for the short is seen at 480.0. Short from the current levels until the market rises above 440.0 is possible, but only at the 1H. 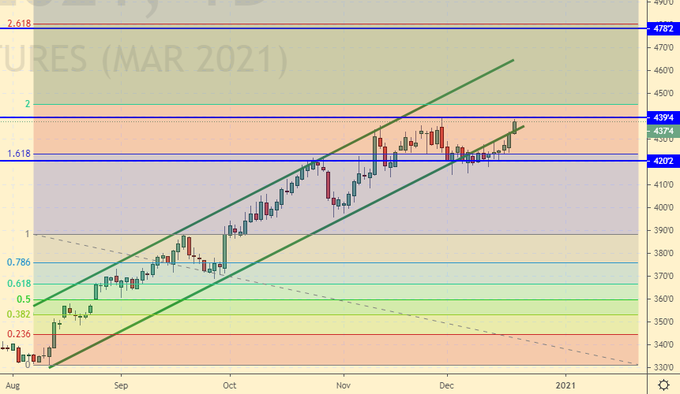 Growth scenario: January futures, expiration date January 14. The market did not correct to 1000.0, which did not give us the opportunity to buy at reasonable prices. While we remain outside the market. We are waiting for a rollback down from 1260.0.

Falling scenario: It is very likely that we are heading to 1260.0, where a pause will be taken. After that, the growth will continue to 1390.0. The decline in citizens’ incomes due to the pandemic has caused an increase in demand for vegetable oils, which makes it possible for continued price increases. We do not sell. 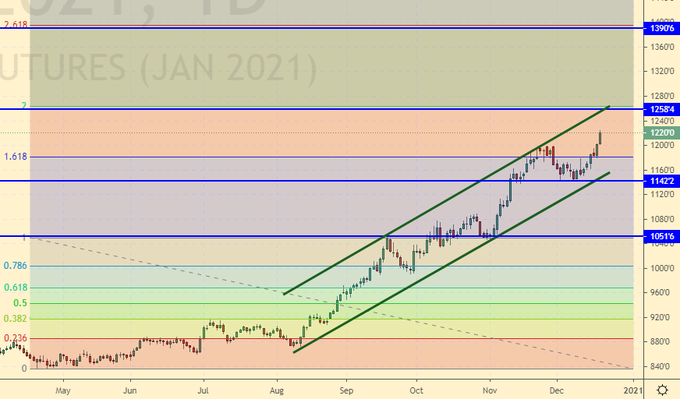 Growth scenario: March futures, expiration date February 26. The situation for buying is not very good, but you can still try. In case of growth above 15.00, it is worth adding. Prices are still within the growing channel, which gives hope.

Falling scenario: Red Friday created an «engulfing» pattern for us, which may lead to a continuation of the fall. Let’s go in short. Let’s add in case of falling below 13.84. 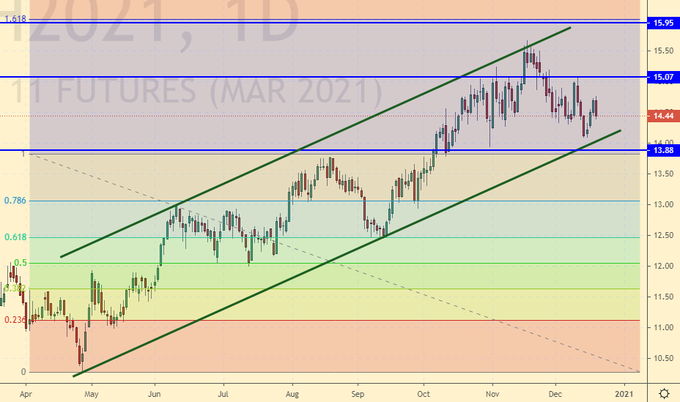 Growth scenario: March futures, expiration date March 19. We still believe in continued growth and keep longs. We will not give the market much freedom, but will tighten stop orders.

Falling scenario: now it’s worth considering shorts. The end of the week was left for sellers, which may lead to some cooling. 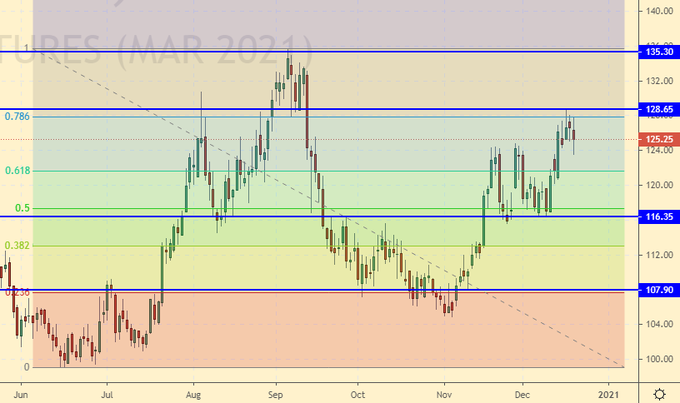 Growth scenario: Gold rallies amid soft commentary from the Fed. Traders have no doubt that the economy will be pumped with money. As a result, the value of the dollar itself relative to other currencies and gold should decline. If we rise above 1900, buy.

Falling scenario: given the ongoing problems with the virus, we will refrain from selling for now. The rise in prices above 1875 tells us unequivocally that the crowd is more likely to buy. 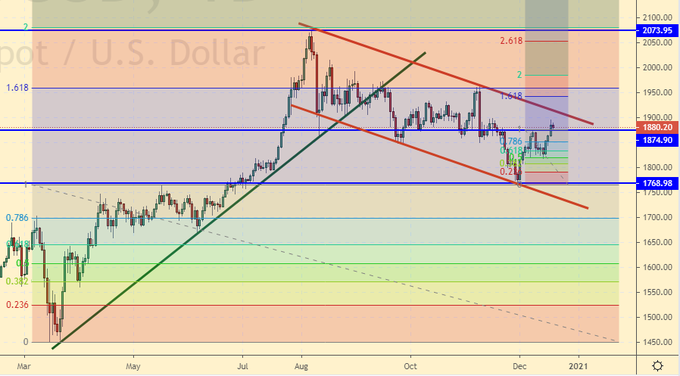 Growth scenario: since Powell announced that there would be as much money as needed, the pair had no choice but to head towards 1.2400. We will continue to stand in the longs, those who wish can add, as there are no signs of a downward reversal at the moment.

Falling scenario: we continue to believe that sales can be interesting from 1.2400. However, there is a risk of a nervous transfer of power to the US, which could send the dollar at 1.3000. We follow the news. Recommendation: 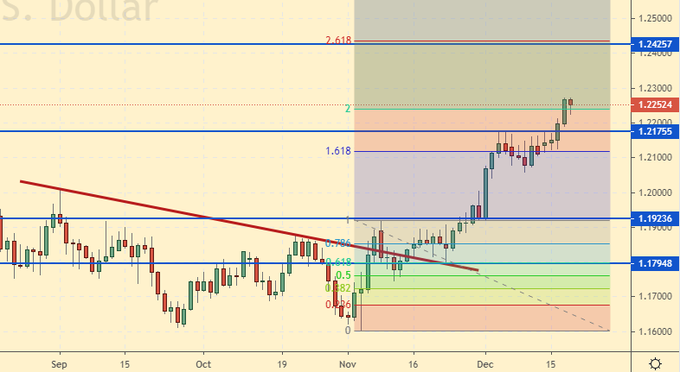 Growth scenario: we continue to recommend buying the pair. Even if we fall to 71.50, it is still worth buying. Only a sharp drop in the dollar index can lead to the strengthening of the ruble to 67.00, and this scenario seems to us as unlikely. 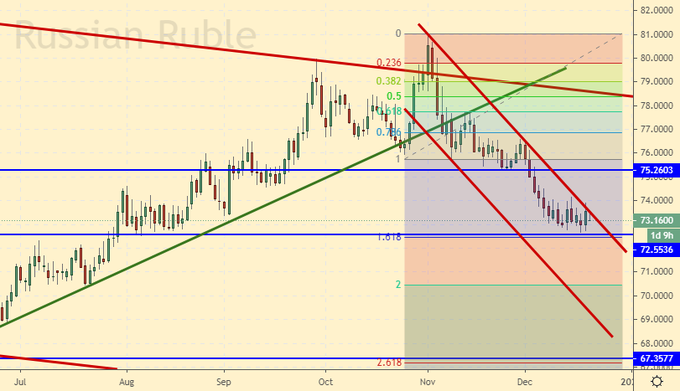 Growth scenario: hit 144,000. Judging by the SP500’s behavior, the external background will remain positive for us until the end of the year. The RTS index can adjust to 130,000 only in case of a strong weakening of the ruble, on the stock market, most likely, optimism will remain until Friday. It is possible to buy at current levels with a close stop order.

Falling scenario: will there be a pullback from 144,000? Sometimes doubting is harmful. Moreover, we have come to an important correction level. We must sell. 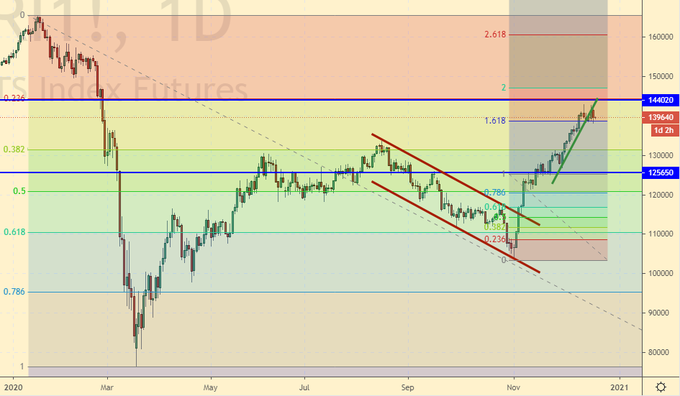